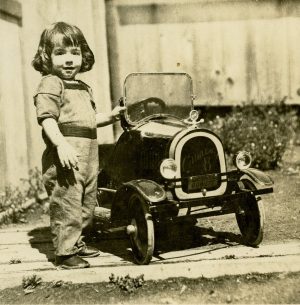 A typical way to date unmarked photos is by studying the people or objects in an image.  Hairstyles, hats and even clothing are all accurate markers of period and time. The Kelley House archives abound with examples of austere families, their children trussed up in their Sunday best, their expressions suggesting that life was ever a dull moment.

Given the adventurous lives of local kids, it’s hard to imagine how they enjoyed freedom when children’s clothing could be costly and formal, especially for girls, who were limited to dark stockings and dresses.

By the end of the 19th century, the development of ready-to-wear clothing and the creation of the U.S. Mail’s Rural Free Delivery service drove the development of mail order shopping. Catalog purveyors such as Sears, Roebuck & Company claimed they sold four ready-to-wear men’s suits each minute as their catalog mailings tripled from 2.3 million in 1910 to more than 7 million in 1929.

By 1912, a revolution was taking place in children’s haberdashery with Levi Strauss & Company at the vanguard of this change. Duly famous for its 501 “waist overalls” popular with miners and laborers, the enduring obsession with blue jeans was still decades away. What catapulted Levi Strauss from a niche to a national market was the introduction of a now little known children’s product. Sold under the name Koveralls, with the slogan “Koveralls Keep Kids Klean,” it was once as ubiquitous as jeans and leggings are today.

The brainchild of Simon Davis (son of Jacob Davis who first riveted 501 jeans), Koveralls were devised for his daughter as a wash-and-wear outfit to be worn over her dress and stockings. The design was ingenious: it had no elastic or binding cuffs yet gave an overall neat appearance. It was roomy where it mattered and easy to remove. It even had a discreet drop seat for convenience and cleanliness and, best of all, both its price and quality were guaranteed. Koveralls sold for 75 cents nationwide and could be exchanged for a new pair if torn.

Levi Strauss offered two versions: a short-sleeved outfit with a Dutch neck (modeled by local kid “Beans” Fleming of Caspar) was designed for girls and little boys, while a long-sleeved version with a round neck was fashioned with older boys in mind. Both types were offered in denim, blue and white hickory stripe, chambray, and olive drab, and in light- and heavy-weight fabrics. The neck and waistline were trimmed with red or blue “Galatea,” a tough fabric previously used for sailor suits.

Koveralls enjoyed widespread popularity following the 1915 Panama Pacific International Exposition in San Francisco. At an onsite demonstration factory, bevies of Levi Strauss seamstresses stitched thousands of pairs of Koveralls for sale to an eager public. They quickly became the “it” garment of the time, popular with children and mothers alike.

Koveralls were advertised in newspapers and magazines into the late 1930s. Their easygoing style and simple good looks can still be spotted on local trendsetters in candid images of the day.

PHOTO CAPTION: Long before the Fast and the Furious, local resident Kenneth “Beans” Fleming tends his “CADILLAC 8” in his Levi Strauss Koveralls.