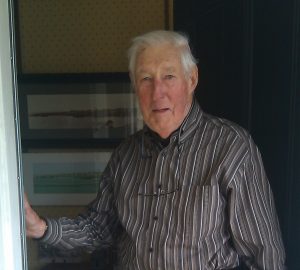 Within ten days of each other, two people fundamental to the traditions and support of the Kelley House passed away.  Chuck Bush and Martha Wagner both gave of themselves, their time and their treasure to help establish the Kelley House Museum and make it what it is today.  This is not meant to serve as an obituary for either of these benefactors, but rather a remembrance of some of their contributions to Mendocino through the Kelley House and a tribute to their civic spirits.

Chuck Bush, a proud distant relative of the scoundrel Henry Meiggs who put Mendocino on the map, served on the Board of Directors of the Kelley House, and ultimately became a Life Member.  He was devoted to the restoration and rehabilitation of the house as a museum.  We have an outbuilding which bears his name, and houses some of the larger items in our collection.  Mr. Bush was very happy to have the opportunity to make the Kelley House part of his life here in Mendocino, a fact made evident by his contributions to our Newsletter made over the years.  Writing in the winter of 2004 (Newsletter no. 63), as Thanksgiving approached, Chuck’s thoughts centered on all the good things in his life, the Kelley House and the unique quality of Mendocino among them.  Chuck wrote

While docenting at Kelley House a few weekends ago, one visitor commented

beautiful and so full of still-functional antique buildings.  How true!

Chuck also created crossword puzzles for our membership; where some of the clues were derived from Mendocino’s history.  A great way to learn or to show off one’s knowledge! 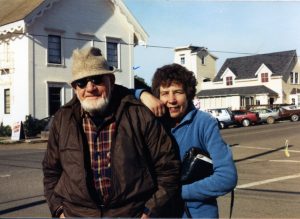 Martha Wagner spent countless hours, adding up to years, in the garden of the Kelley House.  Her generosity has made its continued upkeep possible for the past several years through donations.  She, too, had become a Life Member of the museum.  Martha’s passion for the garden extended into the historic aspects of the ground she worked.  Bill Jacobson, former Board president recalled that Board meetings often had discussions about what should be done in terms of the garden and that “. . . most on the Board just had opinions but not much experience with gardening.  She had both knowledge and experience and was able to make excellent presentations to the Board. . . .”  Her interest in the plantings of the past became informative Newsletter articles, such as the one she cleverly titled “The Appeal of Apples.”  In Martha’s time, the Kelley House had a resident cat, known as “B.C.” (initials for either Bill’s Cat or Black Cat).  In the winter 2002-’03 Newsletter (no. 55), Martha created an article written from B.C.’s perspective.  In the fall of 2001, Martha’s column, titled “Meanwhile, Out in the Garden” began with this astute observation “Gardening is a matter of hoping your enthusiasm lasts until your back gets used to it.”  Martha enjoyed using “!#$%&@!” to describe garden frustrations, such as the speed with which Oxalis pescaprae “the THUG of the oxalis family,” in her words, made its appearance in the midst of the winter rains.

Chuck Bush and Martha Wagner were among our most passionate supporters.  They both wore many hats while sharing their love for the natural world, for this particular corner of the North Coast, and for the Kelley House.  They will be sorely missed, and are deeply appreciated.