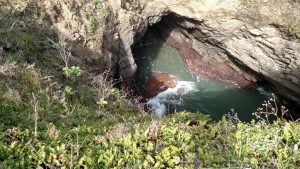 Between Tuesday, March 7th and Saturday, March 11th, some rather low tides occurred.  They are printed in red on the tide table booklet made available by the Mendocino Area Parks Association and are noted at the back of that booklet as “minus tide days.”  On the afternoon of March 7th, a Mendocino resident came by the Kelley House to let us know that he had spotted something of potential interest at the bottom of the “blow hole” out at Shipping Point, located within Mendocino Headlands State Park.  He had photographed the exposed rocks at the base of the blow hole with his cell phone.

It was a lovely day, and I decided to “play hooky” and go out to have a look for myself.  The most prominent object visible was a round piece of what looked to be a wheel or gear related to machinery, measuring perhaps three feet across.  We speculated about what it might be, thinking that it had surely been associated with Mendocino’s shipping history and the mechanisms for loading and unloading lumber, goods and people from this very spot on the headlands.  I took several photographs myself, however the angle of the sun had changed, and the base of the blow hole was now in shadow.

Returning to the Kelley House Museum’s research office, I took a quick look at my own photographs and waited for an email from the interested resident, with his photograph attached.  The email arrived the following day.  I asked some long-term local residents about whether they knew of material being at the base of the blow hole.  Replies indicated no specific knowledge of such.

On further investigation, of both the site itself and the photograph, my best guess is that the round object seen is just one of many others that landed on the top of a pile of scrapped cables, rails, and miscellaneous pieces of steel and iron left over from the once functioning purpose of “Shipping Point.”  Sadly, we know the ocean has too often served as an all too convenient dumping ground for the debris of human activity; Fort Bragg’s “Glass Beach” serves as a well-known local example.  It seems highly likely that the wheel or gear visible in the photograph is at the top of a pile which was gathered together and then pushed off the brink of the headland into the blow hole.  According to notes from our catalog, the last buildings at Shipping Point were dismantled in 1951. Iron in contact with sea water would rust and corrode over time; perhaps the oxidized iron and chemical reactions helped hold everything together in one spot, in spite of the constant washing by wave action.  The bright orange color noted in the area surrounding the round object is unlike anything else within the bottom of the blow hole.  Other non-organic materials are visible in the pile; shapes that are clearly rectangular and reminiscent of segments of rails.

We welcome your questions and input at the Kelley House!  We are here to attempt solutions of “history mysteries,” just as we rely on the community for its knowledge and information about our shared past.