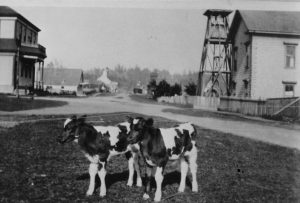 The Mendocino downtown of old was a wild and wooly place — literally. Today, if you browse the narrow alleys and shops around town, or if you are driving a truck on Albion Street between the Kelley House and the MacCallum House, you can’t help but notice the narrow confines produced by on-street parking, two-way traffic, and eager tourists savoring Mendocino’s unquestionable charms. With that picture in mind, add one more thing to your reverie: livestock.

It’s hard to imagine that animals were a problem in bygone Mendocino, yet complaints about livestock were common.

Horses, as one of the most common means of transportation, were to be expected on the streets and at liveries, but not to the point of affecting anyone’s sleep. The Beacon noted as early as 1882, “It is wished that, in the future, parties visiting this town will not leave their horses at all hours of the night tied to hitching posts. The animals suffer the cold and rain. We have been informed that horses have been left out on several occasions until 3 or 4 o’clock in the morning, whose neighing has kept people awake and given evidence of suffering. Some party proposes to rise and put the animals in a livery stable.” Was this the modern equivalent of having your car impounded?

Horses were not the only hooved animals on the road. As later noted in 1888, “Our public pound law seems to be a perfect dead letter. Horses, cattle, hogs, etc. roam the streets at their own free will.” Pictures of the time show cows and calves wandering by the Odd Fellows Hall as Jersey cows grazed near the Ford House. Lacking other routes, sheep and cattle were driven through the center of town. In October of 1913, a thousand head of sheep returning from spring pastures passed through Mendocino on their way to Fort Bragg, escorted by men from the Noyo Land and Cattle Company.

Perhaps, taking the greatest umbrage is this comment from the Beacon circa 1891: “One of the greatest nuisances of our town is the stock roaming on the streets. Pedestrians are consequently in danger dark nights of falling over some one’s cow or hanging up on the horns of an ox. Little Lake Street particularly is unsafe to travel at night on account of these nuisances. It is very unpleasant while returning home after a hard day’s toil to land on the back of an old cow lying in the street and be hurled unexpectedly to the ground by the frightened animal, and is enough to call forth the indignation of an outraged citizen against such annoyances.”

Time tempered these problems. Horses and oxen, once critical for transportation, were replaced by bicycles and motor vehicles. Cattle were limited to one month’s grazing between May and June, just enough to knock down spring grasses. Sidewalks were raised and streets were paved. Gone were the smells and sights of yore when “Watch your step!” was good advice at any hour.

Photo: Calves at the junction of Ukiah and Kasten Streets, Mendocino