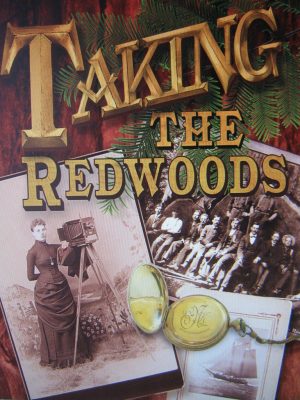 Freelance writer, editor and consultant Vicki Hessel Werkley returns to Mendocino on Sunday, June 11th, as the featured speaker at the Kelley House Museum’s “A Sunday Afternoon With. . .” The topic of that afternoon will be “Taking the Redwoods,” a discussion centered on the life of a fictional woman photographer of 1885 Mendocino, mentored by real life photographer, Ira C. Perry.  The book fits in perfectly with the focus of the Kelley Museum’s current exhibit “Framing History: Worth a Thousand Words.”  Vicki’s presentation begins at 4:00 p.m. at the Kelley House and costs $5 for museum members; $7.00 for non-members.

Vicki and her life-partner Tom Werkley arrived on the Mendocino Coast in April, 1970 and became active members of the coastal community. They were married up Little Lake Road in 1977 and, began serving together as night emergency managers at Little River’s Heritage House Inn that summer. They resided upstairs, above the hotel lobby within the historic Wilder Pullen Farmhouse, where they remained until moving to their own property in Lake County early in 1990.

It was during her thirteen years living in the Pullen House that Vicki wrote drafts of six full-length books, including her first published historical novel, the award-winning Girl-On-Fire (Haven Books). Between 1974 and 1989 Vicki filled many roles as an educator in the Mendocino Unified Schools, where she led student groups in creative writing, among many other topics. Now residing in Lake County, Vicki specializes in fiction and non-fiction. Her love of historical research and teaching has made her a popular speaker at various schools (elementary, high school and junior college levels) in both Lake and Mendocino Counties. Vicki has also been a speaker for numerous social and historical groups, and in conjunction with workshops and book-signings around California, Arizona and Colorado.

Over the years, Vicki has edited more than twenty books and/or novellas, most still in print, notably the artist Kevin Milligan’s Mendocino: a Painted Pictorial—where Vicki began as its editor and ended up as the co-author of the text.

Vicki persisted with much additional research and revision on the last of the manuscripts written in the Pullen Farmhouse; which is slated for publication in the fall of 2017. Taking the Redwoods, about a young woman’s struggle to become a wet-plate photographer in 1885 Mendocino City, is set against the backdrop of the redwood logging and shipping industries. Exhaustive research allows the fictional story to interweave with the facts and details of the town’s true historical attitudes, events and residents, some of whom have descendants and/or other relatives still living in Mendocino County.