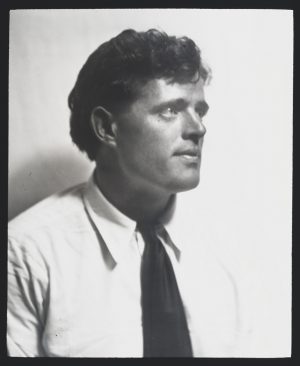 A regular visitor to Greenwood (Elk), and to the Vichy Hot Springs near Ukiah, London had canvassed Mendocino County on horseback after the 1906 earthquake.

At the height of his prolific career, he was hired by the North of Bay Counties Association to promote tourism in the area. Though modern advertising was still in its infancy, the story was slated for publication in Sunset Magazine with a substantial run of 50,000 copies. According to the Petaluma Daily Morning Courier, “it will be one of the greatest advertising projects ever attempted in the territory.”

Traveling with his second wife, Charmian, their path crisscrossed Mendocino, Sonoma, Humboldt, Lake, Marin, and Napa counties in a manner befitting the energetic couple. When questioned on his choice of old school transportation, London noted, “We don’t mix very well with gasoline.”

One can only imagine the scene that unfolded when Jack London telephoned the town of Mendocino to say he was dropping by for a visit.

Though the great literary man was once seen driving his wagon at a breakneck speed down 10 Mile Grade—while standing upright and cracking his whip—he did not on this occasion risk it. The coast road, known to us as Highway 1, was a narrow, unpaved strip of torment clinging to the cliffs.

London extolled the abundance of local trout and sidehill salmon (deer). He praised the profusion of wild lilacs, golden poppies, and giant lupines. “Charmain caused many delays by insisting on getting out to pick the wild blackberries, strawberries and thimbleberries which grew so profusely. And ever we caught peeps, far down, of steam schooners loading lumber in the rocky coves; ever we skirted the cliffs, day after day, crossing stretches of rolling farms and passing thriving villages and saw mill towns.” What he noticed, whether it be the behavior of his horses or the land that lay before him, he noted in exquisite detail.

Upon their arrival, the Londons savored lunch with local businessmen and Jack regaled them with tales of high adventure. The Beacon noted that, “Mrs. London’s enthusiasm over the beauty of our town and its surroundings made a warm spot in our hearts for this vivacious woman.”

The couple was further treated to a tour of the mill complex. “Memorable was our launch trip from Mendocino City upon Big River, where the steering gears of the launches work the reverse of anywhere else in the world; where we saw a stream of logs, of six to twelve and fifteen feet in diameter, which filled the river-bed for miles to the obliteration of any sign of water.”

In his completed article, “Navigating Four Horses North of the Bay,” London enthused, “This region of the six counties alone will someday support a population of millions. In the meanwhile, O you homeseekers, you wealth-seekers, and, above all, you climate seekers, now is the time to get in on the ground floor.”