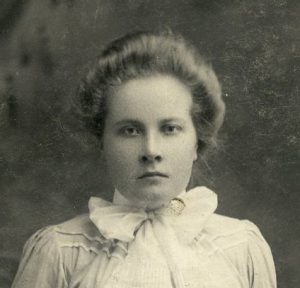 At the opening of the new exhibit on Mendocino photographers at the Kelley House, “Framing History: Worth a Thousand Words,” a couple visitors wondered why people did not smile in those old photos.  Was it because they had bad teeth?  Or because it was easier to hold a stone face during the long exposure times required by early cameras?  Perhaps it was because those Victorians simply weren’t fun people?

A little online research shed light on the topic.  While the long exposure times had something to do with all the gloomy looking men, women and children—often they were asked to sit still for three or four minutes–the main reason they did not flash their pearly whites had to do with 18th and 19th century European views on smiling (Jonathan Jones, The Guardian, August 12, 2015).  It was widely understood that the only people who showed their teeth were the poor, the lewd, and the drunk.  For the upper and middle classes, toothy grins were a breach of etiquette.

In 1703, educator Jean-Baptiste De La Salle wrote in The Rules of Christian Decorum and Civility:

There are some people who raise their upper lip so high…that their teeth are almost entirely visible. Decorum forbids us to allow our teeth to be uncovered, since nature gave us lips to conceal them.

Before the Daguerreotype was invented in 1839, people with money had their portraits painted for posterity.  As with painted portraits, formal photographs were not intended to capture a moment, but rather to embody the subject’s character.  Photography was still rare, and it was expensive.  Many people, especially in middle class families, had their pictures taken only once or twice in their lifetimes, so the experience was significant for them (Nicholas Jeeves, Public Domain Review, December, 2014).

Even Mark Twain, a famously irreverent and funny guy, voiced his opinion about the proper facial expression in a letter to the Sacramento Daily Union in 1866:

A photograph is a most important document, and there is nothing more damning to go down to posterity than a silly, foolish smile caught and fixed forever.

This cultural expectation persisted until the Eastman Kodak Company developed the easy-to-use and affordable “Brownie” camera in 1900.  Kodak’s ads for the camera featured smiling people caught in the spontaneous act of having a wonderful time.  The company provided booklets that demonstrated how to just point and click the shutter.  After large-circulation magazines like Life began featuring photos that were not posed studio shots, people slowly realized that it was possible to look natural and happy while getting their pictures taken (Stephen Dowling, BBC News Magazine, January 5, 2015).

In hindsight it’s clear that the Brownie snapshots were the top of the slippery slope that has delivered to us the superabundance of selfies and food shots that clog our lives today like so much bad cholesterol.  Even the most acute observer has difficulty finding depth of character in grinning Instagram photos.  Furthermore, as historical records, they are way too easy to throw away (just press delete).

When the unsmiling people on exhibit at the Kelley House posed for a photograph, they thought about the passage of time, and about death and memory.  The presence of such grave realities in the old photographs makes them endure.  “Framing History” will be on display at the museum until July 31st, Friday through Monday, 11:00 am to 3:00 pm.  Stop by and expose yourself to art.