‘Twas the Season for Basketball

‘Twas the Season for Basketball 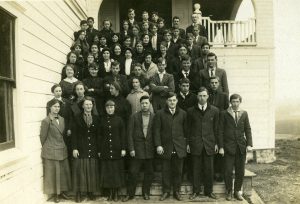 A little over one hundred years ago, it took a heavy dose of determination and grit just to get a high school team to a basketball game. The beginnings of Mendocino High School basketball didn’t present a rosy picture. Back in 1907, writing in the school annual then known as “The Occident,” a student concluded that, “The Mendocino High School has accomplished little in the way of athletics. This is principally due to its isolated situation and the lack of facilities. . .” In those early years, there had been an outdoor basketball court, but it had become “overgrown with weeds, and is the favorite resort of the gopher and the mole. . .”

By the 1912-1913 season, things had improved considerably, such that student teams were traveling to away games. On December 21, 1912, the basketball team had traveled to Ukiah and secured a win. That game held a few days before Christmas was followed by another contest held on January 25, 1913, a Saturday night. For this game, which was said to have secured the championship with a score of 22 to 7, Mendocino over Ukiah, the Beacon provided the following home town line-up: Center – Daniels; Forward – Nichols; Forward – Hee and Farrer; Guard – Brown; Guard – Boyle. With only last names to go by, we conducted further research to come up with the following identifications, based on known or surmised years of graduation: Arthur W. Daniels (class of 1915); Joseph Nichols (based on age); either Harold Hee or Charles Hee (both in 1913 student body photo, with Charles Hee a 1915 graduate); Carl Farrer (most uncertain identification); Arnold Brown (in 1913 student body photo); and Clifton Boyle (younger brother, William H. class of 1918).

The following season, on December 20, 1913, the trip to Ukiah took the team fourteen hours! First, they encountered a downed tree in Comptche. Then, on the Larsen grade, a horse threw a shoe. Climbing up to Orr’s Hot Spring Hill, the team and their ride had to contend with heavy snow, furthering their delay. This was the same time period when auto stages were introduced between Ukiah and the Coast.

Were coaches and parents (if parents attended) expected to be able to deal with all possible mishaps? Yes, they were. It’s difficult to imagine these times when a thrown shoe would present about as much trouble as a flat tire does to us – perhaps less? Did they turn around and get to a nearby farm that had an extra, unoccupied shoe; or did they carry extra horse shoes in a box in the wagon, along with farrier’s tools? They certainly didn’t carry chain saws. Axes, two-man saws, perhaps, were standard equipment when striking out on the roads. Did some of the team members get out and walk when the snow made the road less passable? We only have an inkling of what that may have been like. No heat, no radio for weather reports or road conditions. One had to keep going based on the ability to deal with whatever the next bend in the road afforded. And also, win the game!