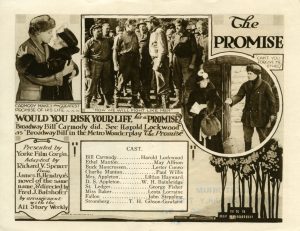 In late December of 1916, near the Boom on Big River, the cast and crew of a new silent film began work on their latest project. The Promise, produced by the Yorke Film Corporation and distributed by Metro Pictures, was one of a series of movies featuring the pairing of two popular actors: Harold Lockwood and May Allison.

The Promise was not a period piece, but meant to entertain and also show audiences certain aspects of the lives of those then engaged in the lumber industry. The plot of The Promise, called for a train wreck, an explosion whose purpose was to break up a log jam, a logging camp complete with villainous camp boss (Buck Moncrossen), and noble ex-New York Broadway restaurant worker turned logger (Bill Carmody) as a role for the leading man. The title of the film referred to a vow to protect an “Indian maiden” (Jeanne) whose honor was endangered by the unwelcome attentions of the camp boss. Circumstances relating to the available locations generated plot twists.

The Internet Movie Database (IMDb) page devoted to The Promise states that it was filmed on location in Oregon. However, Bruce Levene’s book, Mendocino and the Movies (1998), affirms that portions of the film were made here. Newspapers of the time, both the Advocate of Fort Bragg and the Beacon of Mendocino, reported on the filming activities. As would be the case in future decades, many locals were brought into the film’s scenes. Ed Boyle, employed at the time by the Mendocino Lumber Company as a woods boss, was perhaps a perfect example of life imitating art.

Fred J. Balshofer directed The Promise. He had initially offered Harold Lockwood $250 per week to become a leading man for the Yorke Film Corporation, while May Allison received $200 per week to start. Mr. Balshofer hired the two performers, who also traveled to multiple locations to make films such as Haunted Pajamas, Paradise Garden, Broadway Bill, The Square Deceiver, Pidgin Island and The Promise. Anyone’s curiosity would be piqued by the title Haunted Pajamas. Those busy years of filming were described by Balshofer:

We traveled to distant locations to photograph many of the films. Locations

made perfect backgrounds. We also took advantage of the tropical scenery

in and around Palm Beach, Florida, as well as the colorful mountains.

Harold Lockwood died in October of 1918, in New York, during the influenza pandemic. The story of Mendocino’s experience during those months will be the topic of next week’s article.

Photo caption: Advertisement for The Promise 1917