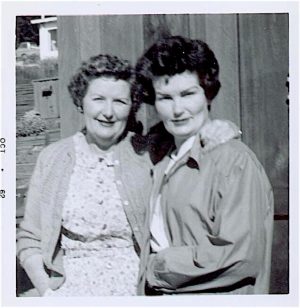 The men were overseas fighting dictatorships, fascism, and tyranny. While they were gone they wrote letters home describing the conditions they lived with daily, and they often described longings they had to return to the normalcy of their previous lives. These letters needed to be delivered, and the U.S. Postal Service was there to provide that service to both G.I.s and their families. In many cases, these communications kept families together under the anxious times that surrounded the early 1940s.

But who would deliver these important missives? And here in Mendocino County we had special problems other less rural communities did not have. Homesteads and towns were scattered from Rockport to Gualala and during the rainy season, when a driver got behind the wheel of the Model As that served as mail trucks, it was often impossible to predict whether the roads would be passable.

Where would the Postal Service find drivers?

A few young women stepped up to answer this call. Sisters Toni and Lu Robinson had recently moved to the North Coast to live with their parents in the old Pullen House south of Little River. They were hired by USPS to drive the mail and, “neither snow nor rain nor heat nor gloom of night stays these couriers from the swift completion of their appointed rounds.” While the Postal Service has no official motto, the popular belief that is the quote above is a tribute to America’s postal workers.

My mother and Aunt Lu (who later became postmaster at Little River for many years) told me that their job was to do exactly that, “complete their appointed rounds.” Rockport to Gualala. Think of what the roads must have been like then.

They would receive incoming mail early in the morning in Mendocino. After dividing up the mail into North and South routes, the heavy bags were loaded into the cars. One young woman would get in a Model A and head for Fort Bragg and points north, while the other would jump in the other Model A and head to Albion and points south.

These were all-day runs. Flat tires, rockslides, mud holes deep enough to float small boats, and herds of sheep or cattle blocking progress were all part of the job. Most of the roads were dirt, so the women often came home less than tidy from digging their mail trucks out of the mud so they could complete their rounds.

But complete them they did. As a way of remembering these times and what these brave women did for our community, I offer this tribute. There are many small parts people play in the making of the history of place. The story of how these two women delivered the mail during the Second World War reminds us that what we do today may not be long remembered, but at the time they occurred, the actions of a few hardy souls help create the ties that hold us together during uncertain times.

Photo caption: Lu Robinson and Toni Lemos, circa 1962 — 20 years after they delivered the mail