Time for Toys and Time for Crab

Time for Toys and Time for Crab

When we were young, all we wanted for Christmas were our two front teeth. Once we got them, many of us wanted to sink them into some Dungeness crab legs on that holiday. And for almost 170 years in Northern California, we have been granted our wish. It didn’t seem like too much to ask. But in various recent years, demoic acid, migrating whales, and poor crab development have contrived to make it so.

An article in the Sacramento Bee this week announced this year’s delay in the opening of the commercial crab season on the California coast: “Californians hoping to observe their traditional crab Christmas dinners will be disappointed again this year.” That started me wondering how, aside from its historic abundance and availability at this time of year (which is certainly reason enough to eat it), did crab become a sacred Christmas dinner tradition?

It got a boost from its origins in the religious practice of Italian immigrants, who began arriving in northern California right before the Gold Rush started. Their custom of eating fish on Christmas Eve arose from the Roman Catholic dietary rule to abstain from meat and dairy products on the eve [vigil] of certain holidays, including Christmas. Christmas Eve is La Vigilia, and the Italian immigrants knew the meal as La Cena [dinner] della Vigilia or La Vigilia di Natale.

To prepare their customary Christmas Eve dinners, the immigrants searched for the fish they had used in Italy. However, although there were plenty of fish in this sea in December, they weren’t the same as the ones in the Mediterranean or Adriatic. Some species were different, others weren’t here at all, and a few were brand new. Adjustments had to be made to the time-honored menus.

Happily, as documented in A History of Dungeness Crab Fisheries in California (Walter Dahlstrom and Paul Wild, California Department of Fish and Game, 1983), “Immigrant Italian fishermen had begun catching Dungeness crabs in San Francisco Bay with the hoopnet or ringnet, contrivances with prototypes that undoubtedly date to the Native Americans. With their lateen-rigged Mediterranean sailboats, the fishermen found crabs in plentiful supply from the Straits of Carquinez to the sandy shorelines of the East Bay.”

It was hard not to notice those crabs: big, juicy, easy to cook, and plentiful. There was nothing like them back in the Bay of Napoli! So, according to Sunset Magazine (November 18, 2004), by the mid- to late 1850s, a new Christmas Eve tradition had been born: crab, maybe a little garlic butter. 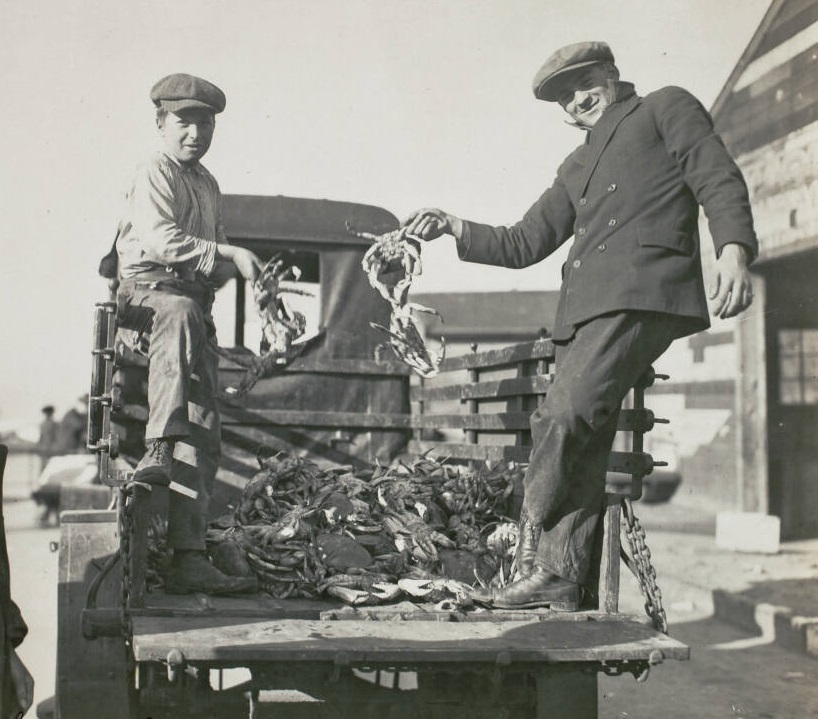 Fifteen or twenty years later, Portuguese Azoreans came to California; being Catholic, they had Christmas Eve food traditions similar to those of the Italians. For both groups, dried salted cod [bacalhau or baccalà] had been one of the staples of their vigil meal. Dried cod is a centuries-old winter food in maritime European cultures, but it never really caught on around here. Our cod is different from the Atlantic fish, and why salt it and dry it when you can just catch it and eat it? Like the Italians, the Portuguese found it easy to incorporate Dungeness crab into their holiday meals (and if you’ve ever eaten reconstituted dried cod, you perhaps understand why).

But the Bay was being polluted by all the mining tailings washing into it, and “Clams, the natural food of the crab, disappeared from the Bay. Followed by crabs. The best crab catches were made outside the Golden Gate, so the crab fishermen moved to bays and estuaries north and south of the city” (California Department of Fish and Game again). However, Fisherman’s Wharf had been established as the epicenter of fresh crab in the late autumn months, the destination of tourists from all over the world; even as the crab fishery expanded, market share was held by San Francisco. And market it did, widely!

If you’re not a recreational crabber, or lack friends who are, this column has probably been sweet torture. For you, and for many of us, there won’t be fresh crab this Christmas. How about some dried salted cod?

The Kelley House museum is open from 11AM to 3PM Thursday through Sunday. There will be numerous walking tours of the historic district all through the holidays departing from the Kelley House. If you have a question about Mendocino history, contact the curator at curator@kelleyhousemuseum.org