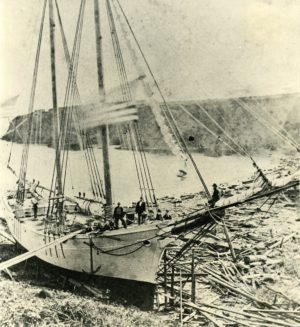 Take a look at any panoramic photo of early Little River and you’ll notice that where once stood many structures — houses, the mill, and hotels — are now a lot of trees and bushes. Of the several vanished landmarks of long ago, there is one that wasn’t readily seen even when it existed: the shipyard of Thomas Petersen. A native of Denmark, hence the “sen”, his name remains on a little street at the top of the Highway 1 curve, just west of the 25 MPH sign. The shipyard was at the end of Petersen Lane, which is now a gated private property, on the shore beyond the northern rocky bluff.

Petersen built ships at several other places nearby on our coast (more than any other shipwright), and in Washington state, but Little River was his favorite and with the most launchings — fourteen. Local folk always came out for the launchings, complete with a grand buffet in the carpentry shop. Since carpentry skills among locals were prevalent in those days, Petersen had good ship building help including, for a while, his brother John. Petersen insisted on getting the best logs, three for each vessel, for the mast, keel and body of the ship. The Albion area was the primary source for the trees. How the logs were transported to Little River is debatable, but from Little River beach they were floated at high tide and guided around the point.

His wife, Sophia, also Danish, helped a lot, weighing all the ironware parts — rivets, bolts and such — making sure the weight was divided evenly on each side of the ship. The Petersens raised five children in their house on the bluff above the shipyard. They sold their home in 1887 and moved to Washington where Thomas died at age 79 in 1915.

A well-illustrated definitive story, “Thomas H. Petersen, Master Shipbuilder” by Louis Hough, was published in 2015 by Kelley House Museum and is sold there and on its website. Little River bay was naturally one of the best harbors for shipping in the area, but having a few rock obstacles and no immunity to storms, it was not without a few wrecks. Coastal ports that shipped lumber products had two main methods for loading ships: by “lighter”, a simple watercraft for the sole purpose of loading and unloading ships; and “apron chutes’, scary-looking, scaffold-like structures on the top of the bluffs extending out over the water with wires and cables to carry single boards or bundles of lumber or railroad ties to the ship. Little River had both, with chutes at both the north and south sides of the harbor.

The first attempt to make a better port was a sort of haphazard floating pier-like construction that soon fell victim to tides and bad weather. Mill owners Silas Coombs and Ruel Stickney had a better idea. They applied for and were granted permission in 1872 to build a wharf and collect fees for its use. The Little River Wharf extended from the cliff on the north side and extended 330 feet into the sea. One of very few wharves in the area, and well-maintained, it lasted over forty years, which was quite an economic benefit to the mill as well as the town. It had two levels with rail tramways, the upper one for loading and unloading ties and freight, the lower one for lumber directly from the mill, which was located in what is now the entrance area to Van Damme State Park. It taxes the imagination as to what equipment existed at that time to pound pilings into the seafloor and to replace them as needed, since the wood was vulnerable to rot. Best reports estimate that it took four or so years to build.

Getting people and goods in and out of the area by ship lasted a long time in this coastal area because there were few, and mostly awful, roads. Railroads were non-existent. Don’t even ask about bridges. Eventually the train from Fort Bragg to Willits changed that and, in time, with better roads, trucks did the hauling, at least for freight. Stagecoaches transported people to inland railway stations for a long time, eventually replaced by various motored transports and then by autos. Although the exact date for the end of shipping from the Little River wharf is not known, the wharf was eventually abandoned. Two or three pilings could still be seen as late as 1923. A good photo of the wharf is hanging in the bar of the Little River Inn.

As the town population grew, the need for a schoolhouse was apparent. A small cabin served as an early one, followed by a building on John Dennen’s property (Schoolhouse Creek). Both were not only too small, they were quite a distance for children to walk. In April 1877, Silas Coombs donated land and locals donated lumber and pitched in to build a 30’ x 53’ structure for the school. It would be helpful if a commemorative plaque marked the site. The best clues for its location are that it was “about a quarter mile south of Silas Coombs home” (now Little River Inn) on a “rocky slope bordering the highway” on the west side, north of the cemetery. Those descriptions indicate that it was probably somewhere across the highway from the current Little River store and post office. It was painted white, had porches on three sides, a belfry, and separate entrances for boys and girls. Students toted water from nearby wells, as there was no water on the site. For heating there was a wood stove, which probably caused the fire that damaged the roof in 1927. Until repairs were done, classes were held in the Little River Improvement Club building. The school closed in 1941.