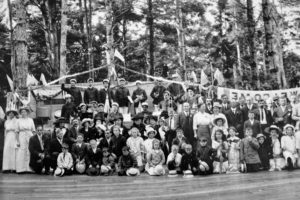 In 1914, the town of Mendocino made a decision. The June 6 edition of the Mendocino Beacon announced that Mendocino would celebrate the Fourth of July for the first time since 1908. Those interested in contributing to the town’s plans were invited to attend a meeting that Wednesday at the Bank of Commerce (today’s Out of This World), on the corner of Main and Kasten Streets.

Attendees rapidly organized and determined to host a “clean” Fourth of July celebration: an “old time” (their words!) party to which all would be invited and in which all could participate. Planning for the patriotic observance of the nation’s independence began with the announcement of meetings and the formation of committees. The Beacon published plans for a two-day schedule of activities, certain to please both locals and visitors alike.

There would be a Ball on Friday, July 3, with a midnight chicken supper. The following day a picnic featuring roasted meat, potatoes and hot coffee would sustain the populace. Dancing on a newly built platform would begin after the pie and ice cream eating contests. The band featured throughout the two-day celebration was the apparently well-known “N.S.G.W. Band.” Its musicians were, we assume, members of the Native Sons of the Golden West. In the intervening weeks, each issue of the paper revealed more enticing and entertaining plans.

Sporting events and contests would occupy the morning of the big day. These included: a 50-yard dash for boys age 15 and under, with the same for girls; a 100-yard dash “free for all”; another for a distance of 220 yards; an obstacle race, sack race, centipede race, three-legged race, egg race for girls, fat men’s race, wheelbarrow race and relay race. Contestants had to bring their own wheelbarrows for the wheelbarrow race. There was nothing in print to determine the criteria for entering the “fat men’s race.” An approximation of the nature of the centipede race was revealed in a later issue, when the names of those team members taking 1st and 2nd place wins were printed — there were five on a team. Of course there was a greased pig contest, the 75-pound pig supplied by Mr. Chris Ottoson of Comptche. The pig was raised on acorns and given to be “a lively critter.” Many of the races were held on Main Street opposite the fire engine house. There was to be no parade, but rather, everyone would follow the N.S.G.W. Band up from “the lot” at Main and Howard Streets (now Rotary Park?) to the area cleared for the picnic and dance. This would occur after the morning’s baseball game between the Albion Tigers and players recruited from Mendocino.

The outdoor Fourth of July dance took place in what later became Grindle Park, donated to the town as a public space by Joshua Grindle. The land set aside was located in the Hills Tract. The dance required a floor and so work on the anticipated platform began June 28. The dancefloor measured 40 by 80 feet. Perley Maxwell, Frank Mathews and John Triguerio took on the responsibility for construction of the platform.

The night would be capped off with a confetti battle. On an earlier occasion, along with confetti, serpentine “filled the air with bright colors.” (Serpentine may refer to an early form of gun powder.) Participants were advised, “Be sure and load yourselves up with confetti and serpentine. Turn yourselves loose and have a good time. Go to it!” Townspeople were asked, however, to refrain from throwing their confetti during the live entertainments offered along with “One Reel Moving Pictures.” The confetti battle was to take place “on the streets.” The Beacon made no mention of a clean-up committee following this event.