Traveling in the Past? See Mr. Sutherland!

Home » Making History Blog » Traveling in the Past? See Mr. Sutherland!
Previous Next

Traveling in the Past? See Mr. Sutherland! 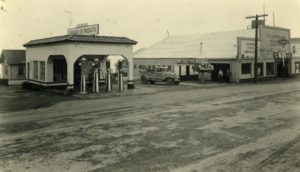 Somehow, buying gasoline is associated with the summer season. Those of us driving gas-powered vehicles do purchase fuel year round, but the summer months often see an increase in the number of trips to the pump and a consequent rise in prices. Back in the 1930s and ‘40s, one could have bought gas in Mendocino at the S & E Gas Station located on Main Street.

The proprietor at that time was Ralph C. Sutherland, son of Thomas and Hilma Sutherland. Ralph’s father had been born in Finland and his mother in Norway. Ralph was born in 1903 on Navarro Ridge and among those “first generation” children born on the Mendocino Coast. The name “S & E” derived from a partnership between the Sutherlands and the Escolas, another well-known local family with roots in Finland.

Ralph left school fairly early with a gift for understanding mechanics and a good head for business. Coming of age in the early decades of the 20th century, he would have been surrounded by exciting opportunities within the industries that grew from Americans’ love for traveling in automobiles.

The service station was located next to the property that had belonged to the Norton family and at one time was occupied by the Occidental Hotel. Ralph began working at the garage as a mechanic in 1922. There were autos with tanks to fill, autos to repair and autos to be sold. Mr. Lyons and Mr. Mendosa bought the garage in 1925. Ralph continued on as an employee and worked up through the ranks, eventually becoming the owner in 1932. Cars sold from the premises included Fords, DeSotos, Plymouths and Dorts (look that one up!) Ralph Sutherland was also the Mendocino agent for the International Harvester Company.

The photograph, taken sometime between 1936 and 1946, shows Ralph’s truck with its sides painted. It advertised the fact that he was a dealer for the DeSoto and Plymouth auto companies. A vehicle is up on the automatic hoist and turntable, which the Beacon reported as having been installed in 1936. He made the first sale of trucks to the Union Lumber Company in 1937.

The gas station shown has the arched entry and red tile roofed design so typical of the time period, one that would have been familiar to drivers up and down California. The sign on the roof let drivers know that Sutherland sold products refined by the Standard Oil Company; another sign indicated the location of the ladies’ room toward the back. The cottage residence built behind the station also is visible. It would have been a convenience for Ralph to walk around to the rear of the station, enter the house and enjoy a lunch prepared by his wife, Edith Switzer Sutherland.

That seemingly simple lifestyle ramped up a bit when the Sutherlands decided to move to Fort Bragg in 1946. There, Ralph purchased the property on Main Street at Laurel formerly owned by the Willig Freight Line. Ralph wasted no time in making changes he thought suitable to the property to prepare it for his new dealership. Mr. Sutherland continued his business at this location until his retirement in 1968. He died seven years later on February 19, 1975, and was buried at Rose Memorial Park in Fort Bragg.

Thanks to the dozens of Kelley House Museum Business members, whose support helps fund museum and archives operations. If you would like information about becoming a Business member, please visit kelleyhousemuseum.org/sponsors or call 707-937-5791.