A Little History of the Little River Improvement Club and Museum

A Little History of the Little River Improvement Club and Museum 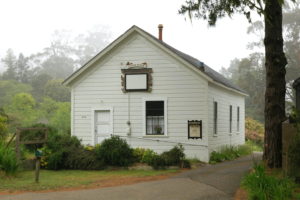 It’s such a small, plain little white building, set back from the road, you probably don’t even notice it when you drive by. Besides, you’re keeping your eye on the road, which is a good thing, because it’s at the top of the curvy part of Highway 1.

On March 11, 1885, Etta Pullen wrote in her diary, “Wilder off early to commence work on “Good Temples Hall”, the land father gave at Little River, that he has the contract to build.” Wilder was Etta’s husband. Her father, Isaiah Stevens, donated part of his land from the property now known as Glendeven Inn. Locals donated lumber and labor. Six weeks later, on April 24, Etta followed up with this entry, “We went to the Dedication of the “Good Temples Hall” in eve.” Mrs. Homer Barton, daughter of innkeeper August Mahlman, wrote from her memories, “Ice cream and lemonade were sold at the dedication, as well as ‘buttonears’ (boutonnieres) for the men.” She also mentioned that it had a fishpond.

The original purpose of the building was for the local chapter, Lodge Number 334, of the International Order of Good Templars, an anti-liquor society. Previously the group of local prohibitionists, many of them Quakers and Seventh Day Adventists, had been meeting in the community room/dance hall/skating rink across the street at Mahlman’s Pioneer Hotel. (The building just south of the Lodge was John Marsan’s blacksmith shop, now a residence.)

The Good Templars, established in the 1850s, formatted their society along the lines of the Masons, including the rituals and regalia. The original ornate charter, which is framed and hanging in the building, exemplifies this. A main difference from the Masons was that both men and women could be members and attend meetings. There was even a program for children called Band of Hope.

In 1915, the ladies of Little River, who had formed an Improvement Club in 1909 and were meeting in members’ homes, started to use the building as a meeting place. When they learned that taxes on the building were not being paid, they not only took care of that, but the care of the building as well. Painting and repairing were done as needed; even a domed plywood ceiling was installed, one of only two such vaulted ceilings in California. In recent years it acquired a new foundation as well as heating, plumbing and kitchen updating, but the building’s essential character has been unchanged with those improvements. In fact, it is the only local historic building that has maintained its original integrity. The original redwood benches built by Richard Coombs and shipbuilder Thomas Petersen are still there. Artifacts and furniture of early Little River residents are on display, plus an informative exhibit of Pomo history, and a natural history exhibit of local birds.

For many years the building was a popular place for gatherings of all kinds — card parties, dances, potlucks, even church and Sunday school. It was the local polling place (a voting booth is on display), and at various times it had a library, telephone exchange, art gallery and, when the roof of the Little River Schoolhouse burned, it was a classroom.

There are many photos, artifacts and documents about the early days of Little River in the Kelley House Museum archives. If you would like to see them, please call 707-937-5791 to make an appointment.