There and Back Again: The Bell of Westport’s Schoolhouse

Home » Making History Blog » There and Back Again: The Bell of Westport’s Schoolhouse
Previous Next

There and Back Again: The Bell of Westport’s Schoolhouse 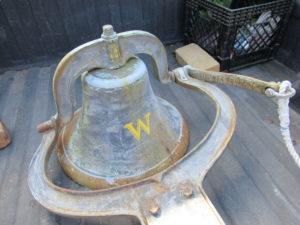 Like many of the objects from the nineteenth century, the Westport bell was made to last. There are some gaps in its history, but according to a Kelley House newsletter article by Teresa Jardstrom, a teacher at the Westport School from 1932 to 1952, the bell’s working life began on board a ship. Unfortunately, the name of that ship has been lost, however, the bell had found its way to Westport. It would have been installed at the schoolhouse, which was built in 1891.

As with many other coastal towns, Westport has had its ups and downs. The story of the bell is necessarily linked to the story of the rise and fall of population in that part of the North Coast above the Ten Mile River.

For a thoroughly researched history of this ruggedly beautiful stretch of the coast, the reader is referred to Belonging to Places: the Evolution of Coastal Communities and Landscapes between Ten Mile River and Cottoneva Creek by Thad M.Van Bueren, jointly published in 2012 by the Kelley House Museum and the Westport Village Society. Collectively, towns located north of Cleone boasted a population of 859 people in 1880. Population was important, then as now, because it is a determining factor in whether or not a school is warranted. 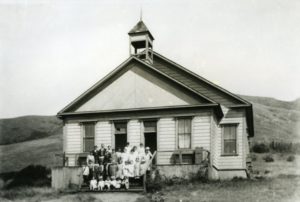 The Westport School, built in 1891

As explained by Van Bueren, the demand for products such as lumber, tanbark, railroad ties, shingles, wool, and potatoes varied. The chutes at Westport landing were kept busy in the years between 1878 and 1883 with products such as these, comprising the loads of over two hundred vessels. Movement of all these products required men to be hired and with employment came workers and their families. Children needed a school. The Westport School District began teaching students at a public school in 1879.

Twenty years later, news of the reopening of a school in Westport came to the attention of Mendocino High School teacher Bill Brazill, Mendocino County native and all-around local historian. Bill thought it would be a great idea for the bell to be reunited with its Westport roots, and made arrangements with the Fort Bragg Unified School District to do just that. According to a December 1999 article in the Advocate-News, the bell was restored with the help of a FBUSD former board member and blacksmith, Russ Barhight; former FBUSD teacher, Bud Burdick; and painter Dave Morgan. On its way north, the bell made a stop at Woody’s Weld All in Fort Bragg before continuing its journey back home to Westport. Once there, Westport School teacher Kathleen Oakes and her twelve students made use of the bell. In 1999, Westport had gone without a school for a stretch of 34 years. 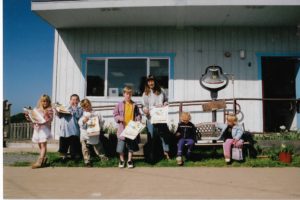 By 2010, the Westport School had been empty again for about two years. Bill Brazill was concerned for the security of the bell and approached the school superintendent in Fort Bragg. The FBUSD could not store the bell, so it was returned south, where it was stored on a ranch in Comptche belonging to a Brazill family member. Officially, the bell still belonged to the Kelley House Museum and had been loaned to the Westport School. With the assistance of Bill Brazill, the Kelley House contacted the Westport Village Society about having the bell returned. The Kelley House Museum’s Board was asked to make a permanent gift of the bell to the Westport Village Society. Members of the Board enthusiastically agreed! Once again, Bill Brazill, with the much-needed help of Kelley House volunteer Bill Lemos, loaded the bell into his truck (not a task to be taken lightly) and transported it north. Although we don’t know much about its origins, the Westport bell seems to have come home.