Get You a Copper Kettle

Home » Making History Blog » Get You a Copper Kettle
Previous Next

Get You a Copper Kettle 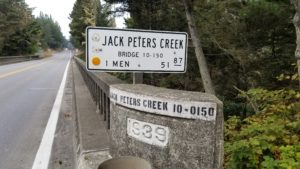 Sign for Jack Peters Creek Bridge on Highway 1. The bridge was completed in 1939, one of the Works Progress Administration projects of the New Deal.

(Folksong written by Frank A Beddoe in the 1950s)

This summer, I stopped by the Kelley House Research Office to look at the birth and death record books, searching for information on the elusive Jack Peters. Some friends and I had been wondering who he was, as there is a Highway One bridge with his name on it just north of Mendocino that takes vehicles over the gulch and stream that also bear his name.

Bette Duke, a fellow researcher, was there too, and she asked if she could help me in any way – there must have been a frustrated look on my face. So I told her of my search for Jack Peters and she calmly said, “Oh yes, I have a file on that.” What!? I had been trying in vain to unearth clues, using all manner of online resources, but with little results.

Bette went down the stairs into the vault containing the archives, brought up the PETERS family file and then copied some of the materials in it for me. The Museum’s “Family Files” contain many clippings and notations, anything that mentions a name, such as Peters.

Here was a mention of a John “Jack” Peters, a native of Sweden, who was a cook at Silas Osborn’s hotel down on west Main Street when the census taker came around in 1860. Hmmmm. Could that be our Jack?

But the really exciting piece I found was a short newspaper-looking column with information that was directly related to my question – for whom was Jack Peters Gulch named? Unfortunately, this valuable snippet of information was undated and had no source. Where did it come from? The Mendocino Beacon?

The chattily written piece stated, “Twenty years ago there was only one whiskey-mill in the neighborhood, and that was kept by one Jack Peters, who took up a place just above here, at a place known as the Jack Peters’ Gulch, now occupied by W. Rice. He (Peters) erected a house and ten-pin alley there, and the boys used to go up very often and give him a call. Poor Jack! His house and ten-pin alley was [sic] destroyed by fire, and he was doomed.”

After a little googling, I found an 1868 General Land Office Patent issued to William W. Rice for 80 acres of land in the east half of the northeast quarter in section 19 of Township 17 north, Range 17 west, in Mendocino County. Looking at a USGS topographic map for Mendocino containing that kind of information, I could see that Jack Peters Gulch is in that same section!

I think we now can say that Mr. Jack Peters, the once-popular but doomed whiskey-mill and bowling alley operator, lived at the gulch named for him prior to 1868. Our map tells us his place was located either north of the gulch in the east part of today’s Surfwood Estates, or south of the gulch near the end of present-day Jack Peters Creek Road.

To see a real copper still, much like Jack Peters whiskey-mill, stop by the Kelley House Museum and visit our current exhibit, “Outlaws of the 20th Century: Rum Runners & Pot Farmers.” Here’s a link to a YouTube video where you can hear the old folksong “Copper Kettle” with an interesting slide show of bootlegging and home-stillery.