In a historian’s world, primary resources are original materials which researchers can study in order to write books or articles about any person or subject. If someone collected my handwritten draft of this newspaper article and saved it, they would have a primary resource. Once the Mendocino Beacon put the story in print in a published issue, that story becomes a secondary resource. 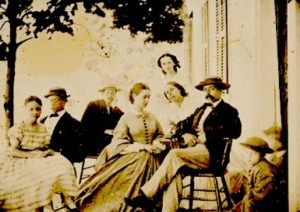 Through the passing of Kelley House Museum docent and walking tour guide Marty Simpson, this correspondent inherited his library and came into possession of a mini-treasure trove of primary resources. Docent Marty Simpson’s dad, Seth Simpson, was the librarian for the Oakland Tribune for decades. Somehow, sometime, he was given a packet of letters dating from the 1870s containing correspondence of the Peralta family, early settlers on the shore of the East Bay.

Marty Simpson looked forward to digging into these letters, written in Spanish with a translation into English attached, and writing a feature story about them, but he never got a chance. He left it to yours truly to decide what to do with the Peralta papers.

While I have a wide range of interests, I focus on north western California and railroads. The financial doings of a Californio ranch family 145 years ago did not interest me, so I went looking for a new home for these letters.

The Peralta family story is an interesting one. Don Luis Peralta received a 44,800-acre land grant, known as Rancho San Antonio, from the last Spanish governor of California in 1820. It embraced the sites of the cities of San Leandro, Oakland, Alameda, Emeryville, Piedmont, Berkeley and Albany. Peralta had served 40 years in the Spanish Army in California and that was his reward.

Peralta had four sons and their families settled with Mexican laborers and native peoples and their hacienda became the social and commercial center of the East Bay. They had 8,000 head of cattle and 2,000 horses and a wharf into the bay for shipping. Over 50 years sixteen houses were built. In 1842 the property was split between the four sons, but arguments about ownership were fought in court for decades. While they owned the land, once the California Gold Rush began the lands were run over by squatters who stole their livestock. They had to fight in court, pay legal fees and newly imposed taxes, and they lost most of their lands.

This period 1872-1873 is when these primary documents were written. I didn’t have a Peralta family tree but I believe it was one of Luis’ grandsons writing all the letters and after a pleasant, “Hello…how are you” the text dealt with court issues and land sales. I wasn’t interested.

So what to do? I contacted the nirvana of California history, the Bancroft Library on the University of California, Berkeley, campus to see if they were interested in my donating the Peralta papers. Needless to say, they were thrilled. What are the chances of folks today finding 145-year-old primary resources? Slim to non-existent! Also in the papers was an 1848 Oakland Tribune. Librarian Peter Hanff welcomed me and gave me a tour of the facility.

The outcome? I was pleased, the Bancroft was delighted, and I think Marty Simpson’s spirit would approve. The Peralta papers have a new home.

If you are interested in research and history, please consider becoming a volunteer at the Kelley House. The Research Office, library and archives are open weekdays and we could use your help! To volunteer, please call 707-937-5791 or email curator@kelleyhousemuseum.org.