The Ugly Face of Racism

The Ugly Face of Racism 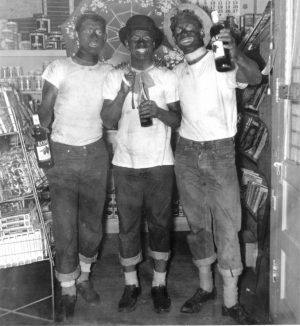 We don’t know who took the picture, but we know when and where it was taken. On Halloween 1954, a trio of teenage boys got together at the Westport Store wearing hats, scarves and blackface. The photograph is important because it shows an era when the use of blackface was nothing out of the ordinary.

The young men in the photograph were identified, but it seems more important to note the nature of the choice they made that Halloween, rather than to dwell on who they are. By addressing this issue, we are not trying to lay blame or point fingers, but rather to include this uncomfortable aspect of our history in our effort to tell a more complete story of towns on the North Coast.

This photograph and the meaning behind it represent a slice of the social history of the Mendocino Coast. One might argue that it could have been taken in almost any town. It may be more of a surprise that it was taken here, given our sense of insulation against the worst aspects of racial prejudice experienced elsewhere within California or in other regions of the United States. It also proves that this part of the world has not been immune to racially driven displays.

Other photographs in the archives depicting people in blackface date to the first decade of the twentieth century and depict members of the Point Arena Minstrel Troupe performing at Halliday’s Hall. These include child actors who performed in blackface. The use of blackface by whites was integral to these shows, which have their roots in racist depictions of African-Americans and date to the early decades of the 1800s. They were done at the expense of blacks. The catalog records for these images were recently changed so that the heritage of racism inherent in the practice was clear. Fortunately, unlike the past, catalog records can be altered.

That the use of blackface persisted as long as it did, and in what was thought to be a comical vein, is perhaps a testament to how far we as a society still have to go. Its use has not disappeared, as a brief internet search will demonstrate.

What is the responsibility of historical institutions when it comes to our shared history? One part of the mission of the Kelley House Museum is “the collection and preservation of documents, records, photographs, books and other artifacts pertaining to the ethnic, economic and social history of Mendocino County” with emphasis placed primarily on the town of Mendocino, the Mendocino Coast and the county as a whole, in that order.

Seeing this, each of us will react differently, given our own experiences and backgrounds. In dealing with history, one of our goals is to make it available; another is to view it honestly.