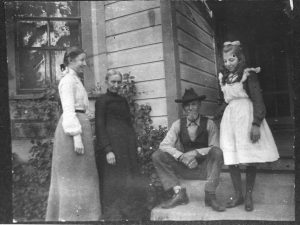 One of the men who arrived in Mendocino and helped establish it was John Edward Chalfant. Like so many others, he came to California during the heady days of the Gold Rush. He wasn’t successful as a miner, but he happened to run into Jerome B. Ford in San Francisco. Mr. Chalfant married Martha Hayes Ford’s sister, Susan. They settled in to a life on the Mendocino headlands, in a house very like that of the Fords. The Chalfant house was located near the foot of Lansing Street. Their house later was incorporated into what became the Norton Hotel, which was partially burned in 1879; and later rebuilt as the Occidental Hotel, which in turn burned down and was never rebuilt.

Mr. Chalfant became wealthy through his work with the Mendocino Mill Company. He purchased and operated a lumber schooner, the Sine Johnson. “Sine” is a fairly common feminine name among Danish and Norwegian families. The schooner seemed to have a special relationship with Albion, where it unintentionally became beached, not once, but twice. The first time occurred in 1874; the second time on November 6, 1878. Both times, the schooner was refloated. Repairs had to be made in 1878 by ship builder, Thomas Petersen, under the orders of James Brett, then superintendent of the Albion Lumber Company. The duration of Mr. Chalfant’s ownership is not certain, but after repairs were made, the schooner resumed its service carrying lumber and was renamed the Governor Perkins. Perhaps Sine Johnson was deemed an unlucky name?

The name change could not have taken place before January of 1880, when George Clement Perkins, born in Kennebunkport, Maine, became the fourteenth governor of California. Perkins was the first governor under California’s second constitution, and came to office during that period when efforts to exclude the Chinese were at their peak. The new constitution, adopted in 1879, prohibited Chinese from being employed by any corporations, state, county or municipal governments. Governor Perkins proclaimed March 4, 1880, as a legal holiday for anti-Chinese demonstrations (A History of Chinese in California: A Syllabus, edited by Thomas W. Chinn, 1973).

The schooner Governor Perkins seems to have had a short career following the name change. According to the chronology of shipwrecks created by author Michael D. White in his book “Shipwrecks of the California Coast: Wood to Iron, Sail to Steam,” the Governor Perkins foundered off Cambria in December 1880. Apparently, the precise whereabouts of the ship was unknown. An article in the Santa Cruz Sentinel dated December 9, 1885, stated that Captain Jordan of the Charles O. Wilson reported a sailor who sighted the remains of a ship believed to be the Governor Perkins, which had been missing for several years. The beach where portions of the wreck were seen was “below Point Sur,” which would have roughly corresponded with foundering “off Cambria.” John Chalfant died in 1905 in Cloverdale, at the age of 80. He left a sizeable fortune of $143,000 to his widow, Susan.