The Radio Days of Miles Paoli

The Radio Days of Miles Paoli 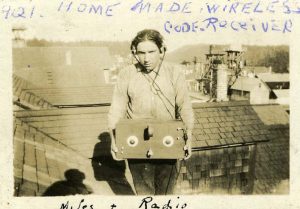 Miles Paoli, born in Mendocino in 1906, was instrumental in bringing radio to the Mendocino Coast. As a young man, Miles was not drawn to school particularly. Miles’ parents, Raffaelo and Emelia, were hard working immigrants who had found opportunity in the logging industry. Later, the Paoli family purchased the hotel on Mendocino’s Ukiah Street, which had belonged to the Borgnas, and had been known as the Sempione Hotel. Miles was thirteen when his family moved from their home near the mill on the flats of Big River into town. Miles and his brothers worked to maintain the gardens, both behind the hotel and in other locations around town. The produce ended up on the plates of hotel guests.

In 1920, Jack Ross, son of the superintendent of the Mendocino Lumber Company and Miles’ friend, introduced Miles to the world of wireless communication and electronics. In the accompanying photograph, you see 15-year old Miles atop the roof of his family’s hotel in 1921. The writing on the photo states that the device in Miles’ hands is his “home made wireless code receiver.” It was a crystal set with a honey-comb coil, a condenser, and other essential parts placed in a cabinet built of half-inch redwood. Earphones completed the equipment. Miles came of age during the Golden Age of Radio and his enthusiasm for and understanding of radios ultimately became the career he pursued.

Our archives contain his “Radio Servicemen of America Certificate of Membership” dated August 10, 1938, and an undated diploma from the “Radio Technical Institute.” During World War II, Miles Paoli served in the Signal Corps, training at Kelly Field in San Antonio, Texas. He was sent overseas on July 4, 1943, helping to establish an air base on one of the islands in the Marianas. He and those who served there with him were under frequent bombardment. At war’s end, he received a “Certificate of Appreciation for War Service” from the U.S. Army Air Forces.

While on furloughs during the war, he came home to Mendocino where civilians had stored radios for Miles to repair. He was certainly good at just about anything he put his hand to. When his father had closed the hotel in 1941, Miles set up a repair shop on the first floor. Miles was fortunate, returning from the war to Mendocino, where he seemingly picked up where he’d left off.

Our archives also include a 1946-47 receipt book from Miles’ repair shop business. A glance through the book reveals the names of those who had remained in town and were in need of Miles’ skill: Jackson was charged $6.59 for a “B” battery; Gorman paid $6 for an aerial kit; Olsen needed 4 radio tubes and spent $5.13. Most customers purchased new tubes, condensers or lamps.  Many were charged for labor only. In the post-war years Miles kept up with the evolving technology, adding the repair of televisions to the services he offered. He registered and renewed his business license with the Bureau of Electronic Repair Dealers in 1963. A 1967 photograph of the old hotel property on Ukiah Street (which appropriately is now home to Mendo Video) shows a sign for “Miles’ TV Hi-Fi Radio Service Shop.” Miles H. Paoli died in June of 1982, surviving his wife, Helen, by five years. He was an honorary member of the Kelley House Museum, where an exhibit was dedicated to him in 1982.