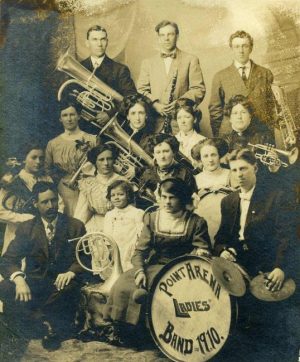 Along with baseball teams and volunteer hose brigades, brass bands were a symbol of a town’s spirit and pride across America around the turn of the twentieth century. The towns of the Mendocino Coast were no exception. Groups of new immigrants, such as those from Italy and Finland, often showed their patriotic devotion and pride by forming a band. There were competitions and, of course, parades.

As the twentieth century opened, women were increasingly determined to proclaim and prove their own worth and rights to full citizenship within society. The photograph here, like so many from the archives of the Kelley House Museum, has a story to tell. In viewing the image, it can’t help but escape one’s notice that although the painted insignia on the bass drum in the right foreground clearly states that this was the “Point Arena Ladies’ Band,” there are people within the photograph who are of the opposite gender. There are five men in the photograph, as well as a young girl posing front and center with a rather satisfied look of belonging and mischief on her face.

Were the men members of the band? Perhaps they were friends or spouses of the women who were members? They hold instruments, signifying that they were most likely band members. This may be an early indication of the famous independence of North Coast society: “We don’t care if our drum states this is a “Ladies’ Band,” we will play our trombone, clarinet, euphonium and cymbals!”

Purchasing sheet music for piano and pump organs was one road toward popularity — if you knew how to play the latest tunes, you would be sought after for those rare moments devoted to home entertainment. When this photograph was taken, in 1910, music recording was still in its earliest stages. That year Carrie Jacobs-Bond, the first American woman to be able to make her living as a composer, sold eight million copies of “A Perfect Day.” The tune was inspired by the sunset as viewed from the Mission Inn in Riverside, California, and was in the ship’s songbook aboard the RMS Titanic. Jacobs-Bond became best known for her composition “I Love You Truly,” written in 1901.

However, brass and wind bands were not about sappy tunes to be played in the parlor. The band pictured here, like so many others, could trace its existence to the military bands which formed during the Civil War. Those bands were about marching and making a sound substantial enough to stir the hearts of the citizenry to action! Although Point Arena has an established history with the performing arts, we don’t know the names of the members of this band or on what occasions they played. It seems likely that they knew the tunes of composers such as Patrick S. Gilmore (1829-1892), John Phillip Sousa (1854-1932), Giuseppe Creatore (1871-1952), and William C. Handy (1873-1958).

If you come across any old sheet music or instruments on your property, they might have belonged to one of the many bands assembled here on the Mendocino Coast. Please feel free to call for an appointment at the Kelley House Museum, as we’re always happy to take a look and consider items for inclusion in our archives.