Every Dog Must Have Its Day

Every Dog Must Have Its Day 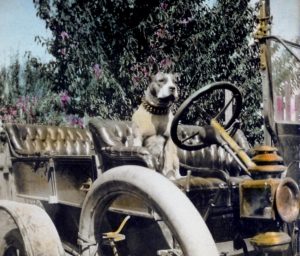 by Sarah Nathe, Kelley House Museum Board Member and Docent

As we come to the end of Dog Days 2017, it seems fitting to recognize the significant canines in Mendocino’s past. Wee Doggies!—were there ever lots of them. A search of the Kelley House Museum’s online collections database turned up 90 photographs of people with their dogs, some in studio portraits and others in informal outdoor shots.  There are dogs with little girls and their dolls, dogs in the laps of grown women, dogs on the front steps of the family home, dogs sitting in rocking chairs, dogs standing on top of very large felled trees, dogs (many) enjoying picnics, dogs on deer hunting trips, dogs in rowboats, dogs in July 4th parades, dogs and men in front of (many) saloons, and — my favorites– dogs behind the wheels of early automobiles.

Clearly, dogs have always had status in Mendocino; big and small, short-haired and long-haired, pure bred and mongrel, ugly and cute, they have been boon companions, best friends, parts of the family. The photographic record shows that Pomo children had dogs, Chinese cooks had dogs, Japanese fishermen had dogs, Finnish loggers had dogs, Italian millworkers had dogs, Portuguese ranchers had dogs, German beachcombers had dogs, and Yankee mill owners had dogs. And they all wanted the beloved pooches included in their photos.

Often, the names of the dogs have been preserved as well. In one of the earliest photos in the dog collection, a studio portrait from 1882, Molly Norton and her father, William, posed with curly blond Prince. A number of shots from 1890 show Sport, Chester Ford’s spaniel, lying in front of the family plot in Evergreen cemetery, at Alder Camp with Alice and Ella Ford Earl, and in the woods inspecting a large redwood tree.  In 1893, Richard and Lizzie Gilman sat for a formal photo with their tail-wagger, Don. That same year, sisters Elise Kelley and Daisy MacCallum were captured at Glen Blair with Daisy’s two children, their Newfie, Bounce, and John Ross’s horse, Flour Sacks.

In subsequent years, many pets were immortalized for posterity with their owners: Joseph Borgna’s dog, Bob, a big bruiser that pulled the children around town in a wagon; Rene and Anna Borgna’s Bimbo, who doesn’t look like one; Jennie and William Blair’s black cocker, Betty; Merna Brown Scott’s Frisky, who looks like one; William Westfall’s Bobo and John Ferrill’s Bobo, alike in name only; and Bill Rieder’s Old Tim, who looks like a puppy.

The new people who arrived in the late ’60s loved dogs no less than the locals. In a 1968 photo, a long-haired couple is seen lingering by the Heeser water tower in the fog, a bandana-collared setter waiting expectantly at their feet. The large group that posed with a tricked out Harley on the steps of the Caspar Inn in 1974 included two dogs: Turkey Bob Smith’s Meadow, and Shirley Fuller’s Sunshine (Sunny to close associates), caught lifting his leg on the corner of the porch. Who’s a bad boy?

Photo: Ed Boyle’s boxer, Shortie, at the wheel of his 1908 two-cylinder Buick.