Discovering Family Ties at the Temple

Discovering Family Ties at the Temple 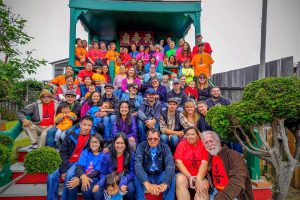 Two families whose histories are nothing short of remarkable recently met in Mendocino. The Look family held a reunion here during the last week of July and the Hee family gathered in Mendocino the second weekend of August. Both families are descendants of people who sailed to California because of the Gold Rush. Their families contributed to the building of the town of Mendocino; their stories inform not only local history, but also that of our nation.

The Looks trace their ancestry back to the 1300s in China. Their family members visited Mendocino from as far away as Sydney, Australia and Hong Kong. The story of their ancestor Look Tin Eli and the father who initially arrived in California, Look Bing Tai, involves seeking wealth in California and establishing a store to serve the Chinese community of the town of Mendocino. Look Tin Eli was born at the back of that store, located on the south side of Main Street, in 1870. He was the first Chinese-American to graduate from Mendocino High School. Upon his graduation, he left Mendocino to make his fortune in San Francisco. Eli did visit China prior to the repeal of the Chinese Exclusion Act of 1882 (which did not occur until 1943). Upon his return to San Francisco from his 1884 business trip, Eli faced a legal challenge and temporarily was prohibited from re-entering the United States.  He challenged the decision at the federal level and won his case. Look Tin Eli worked to relocate San Francisco’s Chinatown after the 1906 earthquake and fire, when there was a movement among businesses to force out the Chinese.

The Hee family shares a part of their story with the Looks. During their visit to Mendocino, the Looks toured the Temple of Kwan Tai, a National Historic Landmark in its own right, maintained through the efforts of volunteers and the families of Loretta Hee McCoard and Lorraine Hee-Chorley. The Hees (a name that came to them because of the need for “paper sons,” a mechanism utilized to circumvent the harsh dictates of the Exclusion Act) are descended from Yip Lee, whose father came to California via sampan (a flat boat) with Look Bing Eli during the 1850s, and landing in Caspar, California. The Temple’s walls have boards on the east and west sides where ancestral names were written and are original to the building. On the east side is the history of the Look ancestors and, on the west side, that of the Lee family. While at the Temple, it was noticed that a Lee had married a Look, providing evidence for what had often been suspected — that the two Mendocino families were tied through bonds of marriage.

The Looks made generous donations to both the Kelley House Museum and the Temple of Kwan Tai. Most of all, they wanted to see the site of their great-great-grandfather’s birth. We were able to find photographs of the store building, which had been located through examinations of both the 1890 Sanborn Maps and the stories that had been passed down from one generation to the next. Through the efforts of the Hee family, Mendocino’s heritage includes one of only seven Chinese temples remaining in California, a testament to the endurance of their ancestors in the face of racial prejudice and bigotry. Their generosity and devotion to local history is evident to the entire community each February during Mendocino’s Chinese New Year celebrations. A special exhibit on the Hee family and the Chinese community in Mendocino will run through August 28 at the Kelley House Museum, open Friday through Monday from 11 a.m. to 3 p.m.

Photograph: 4th, 5th and 6th generation members of the Hee family at the Temple of Kwan Tai on Albion Street in Mendocino