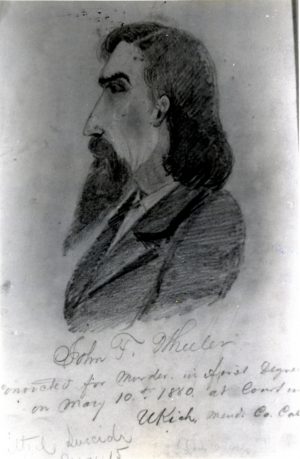 When John F. Wheeler came to Mendocino in 1878, few would have suspected his checkered past. He was married, though we don’t know anything of his wife. He had been trained in dentistry somewhere along the way. Born about 1843, his place of birth was variously recorded as either Arkansas or the Cherokee Nation. His father was born in Tennessee and his mother in Indian Territory. Either way, he may have been raised in Oklahoma. He traveled to points west and eventually found himself in Oregon.

It was while in Oregon that Mr. Wheeler ran into trouble due to his having been caught robbing the U.S. Mail. This was the crime for which he was sent to San Quentin state prison, in Marin County. Mr. Wheeler’s sentence began on April 1, 1869, and was to have a duration of ten years. The online documents describing that stint in prison indicate that he was released in February of 1877.

We don’t have a photograph of John F. Wheeler, former dentist of Mendocino, but we have a detailed description of him from his days in San Quentin. Whether a guard or some other clerk at the prison recorded these features, they were included as data on prisoners. Quoting directly from the record: “spare features large nose large mole on cheek scar right ear wart on right eyelid small mole right cheek bone 4 moles on breast vaccine mark left upper arm scar on joint 3rd finger right hand large wart on the side and do [ditto] on centre of back slim built.” His prison number was 4086.

Did this sketch, produced by Elise Kelley, capture his features accurately? Certainly the long nose is evident. The sketch was saved in a scrapbook, along with pages of favorite clippings, some of which told of events in the lives of Daisy Kelley MacCallum, Elise Kelley Drexler and their cousin, Jennie Blair. Had the Kelley daughters, like so many others in town, been hoodwinked into social acceptance of this con artist, who happened to practice dentistry on the side? Or was Elise helpful to officers of the law by providing a sketch from memory?

On August 31 of 1878, Mr. William Heeser, owner and editor of the Mendocino Beacon, wrote that, “Dr. John F. Wheeler, operating dentist, has opened an office at Norton’s Hotel,” with the added comment, “. . . that he was a good dentist and should be patronized.” In October of that same year, the Beacon noted that “J.F. Wheeler, our local dentist, is doing such a good business that he is thinking of locating here permanently.”

Wheeler’s business card, one of which survived and is in the Kelley House Museum archives has pre-printed blank lines which he could fill in at his convenience. Perhaps this was not unusual for itinerant dentists of the day: “J.F. Wheeler, / Operating Dentist,/  of San Rafael,/ Will remain at Mendocino City/ for a while.” Those portions filling in the lines were handwritten in pencil. He remained at Mendocino City until he was identified as a key figure in the notorious events of October 15, 1879, which resulted in the murder of two Mendocino citizens. Wheeler was tried in Ukiah and sentenced to hang. He avoided the noose, however, committing “suicide by morphine,” on May 15, 1880.

You will be able to read more from this bizarre chapter of our local history in the upcoming book Mendocino 1879 by Albion author Malcolm Macdonald, who conducts much of his research at the Kelley House Museum archives.