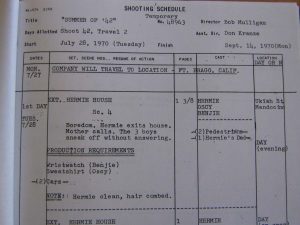 Forty-seven years ago today the cast of the Jennifer O’Neill film Summer of ’42 arrived on the Mendocino Coast to begin work locally on the bittersweet coming of age classic. According to the Shooting Schedule in the Kelley House Museum’s archives, the first day of filming involved the exterior of character Hermie’s house, at present day 45300 Ukiah Street in Mendocino. The schedule noted that the filming location was Fort Bragg, although scenes were shot in both towns. Water towers, houses, street scenes, the high school in Fort Bragg, beaches and other locations all provided scenic backdrops to the story of a heart-broken young widow and an adolescent boy.

The film, directed by Robert Mulligan and produced by Richard Roth, told the story of an unforgettable summer in the lives of Hermie, Oscy and Benjie. The story, written by Herman Raucher, depicted his experiences in the summer of 1942 and was set on fictional Packett Island, while the real life events occurred on Nantucket Island. As with so many other film productions, the Mendocino Coast served as a stand-in for New England.

If you wanted to be in the movie (and who wouldn’t?), you had to make an appointment with Marlene Hall at the now legendary Sea Gull restaurant in Mendocino. The Sea Gull played a role in the production, as it was one of the restaurants frequented by members of the cast and crew.  According to a September 11 article in the Mendocino Beacon that year, fifteen to twenty residents were hired. Some of the lucky locals who made it into the film included June and Jone Lemos, both longtime supporters of the Kelley House.

Before filming began, a request was made to local residents for the use of vintage cars and trucks. Residents were also asked for their cooperation in the removal of television antennas for the duration of a few hours for some shots. Little Lake and Woodward Streets were involved in a scene where Hermie (played by Gary Grimes) carries groceries for Jennifer O’Neill’s character, Dorothy. Announcements were made in the Beacon of when filming would require temporary “no parking” zones to be established in the town of Mendocino on parts of Ukiah, Little Lake, the Woodward-Osborne Alley and Williams Street.

Summer of ’42 opened in Fort Bragg at the Coast Theatre in June, 1971, to a capacity crowd.  The screening was a benefit performance for the Paul Bunyan Work Training Center and tickets cost $2.50. The movie was well received, given the familiarity of the scenes and the faces of some extras. As for Academy Awards, the movie won in the category of original dramatic musical score. Local historian Bruce Levene compiled and edited the book from which most of this information was taken, Mendocino and the Movies: Hollywood and Television motion Pictures Filmed on the Mendocino Coast. You can find that book for purchase at the Kelley House Museum. You can also make an appointment to come by and read the Shooting Schedule, the script (signed by members of the cast and crew), and the Call Sheet for Make-up. The movie can be rented locally at Figueiredo’s in Fort Bragg and Mendo Video on Ukiah Street in Mendocino — just a stone’s throw from Hermie’s house.

Photo: Summer of ’42 Shooting Schedule for the first day of filming in Mendocino