October 16, 1858 – Logging contractor Daniel Milliken received payment for overseeing the construction of the Piers. According to “Big River was Dammed” by Francis Jackson, the four piers were “man made islands constructed in the main river channel” whose purpose was to stop logs from being washed downriver and out to sea.

The piers were part of the boom, “a barrier of sorts, logs roped together end to end to keep logs from floating away.” The log storage area stretched upriver about a mile. “Within that area twenty to twenty-five thousand logs could be stored, keeping the mill operating for almost one year.” This boom, which was maintained from 1858 to 1926, “was located at a bend in the river near Hare Creek, about three and one-half miles up Big River. For sixty-eight years, these solidly built piers stopped the logs being carried down the river.” 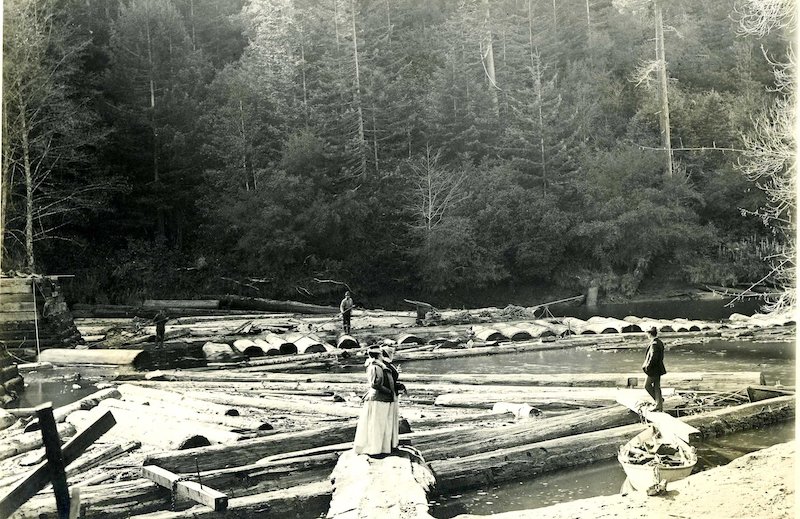 Log Boom, c. 1880. Photograph of two women standing on a log boom, location uncertain. On the left are piers similar to those described by Francis Jackson. To the right is a small rowboat and a well dressed man. In the background are two workers. This photograph is one of many from the Ford Family album. (Gift of Aline Ford Pierce)

At the boom, the logs were assembled into rafts. Rafts were then moved down the river on outgoing tides to the holding pond at the mill. The rafts “were originally ridden by men armed with long poles by which they guided the rafts into deeper waters of the river. Some time later rowboats came into use in guiding the rafts.”

The first Maru, a flat-bottomed scow with a small steam engine that provided power to a stern-mounted paddle wheel, was launched in 1902 and took over the job of guiding rafts to the mill. The Maru didn’t pull the raft, but “simply kept a strain on the connecting rope” to keep the raft within the river channel.

By 1926, this boom “had become useless in that its log storage area had filled with sunken logs and” other debris. A new boom was constructed slightly over a mile downriver and was first used in 1927.