Sunday Afternoon With Your Ancestors, 9/24 4PM

Sunday Afternoon With Your Ancestors, 9/24 4PM 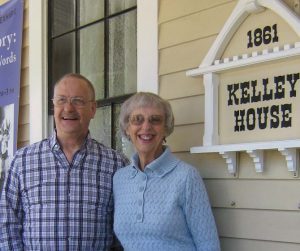 Sunday Afternoon With Your Ancestors, presented by Phil Carnahan and Barbara Webster

Have you ever wondered about your ancestors, but been deterred by the cost of learning more about them? Two residents of Ukiah are coming to the Kelley House Museum on Sunday, September 24, at 4:00 p.m. to discuss how they addressed that situation. Barbara Webster will speak about the work done by Phil Carnahan to make history, particularly family history, more accessible to people who want to learn about their Mendocino County ancestors.

The data existed, but not in one convenient place. With some help of other researchers and organizations, Phil was able to gather data together in a single website and make it available free of charge. “Mendocino County Indexes,” at http://freepages.genealogy.rootsweb.ancestry.com/~mendocem, is a rootsweb supported set of databases, links, transcribed lists, and photographs of documents, which has resulted in the creation of a tree on ancestry.com for all of Mendocino County.

The tree currently has 101,000 names on it and continues to grow. The website is updated around the first of each month; obituaries are downloaded daily from County newspapers and posted monthly. Phil Carnahan believes that the last inventory of public cemeteries in the county was done in the 1980s. Consequently, he has walked them all in an effort to bring that information up to date.

Phil’s interest in genealogy began as a search for his family’s history. The family dates to 1895 in Willits, having come to Mendocino County from Arbuckle, in Colusa County. Phil volunteered as a researcher at the Held-Poage Research Library in Ukiah from 1998 through 2015. Barbara Webster, a native of Petaluma, was introduced to genealogy by an uncle in 1971 and began researching in earnest in 1980. Her family traces its roots to a drayage business that began in the 1850s in San Francisco in response to the Gold Rush. Barbara also volunteered as a researcher at the Held-Poage Library from 2004 through 2016.

Phil hopes to “enlist the help of some of the folks attending” the Sunday afternoon presentation at the Kelley House Museum. He would like to be able to build up the newspaper index to better cover all the county papers and their years of publication. There is a gap in his information for the 1980s and those interested in genealogy are asked to consider lending a hand.

“Sunday Afternoon With…” is an ongoing speaker series presented six times a year by the Kelley House Museum. Admission is $5 for members and $7 for the public. The final program of the year will be Sunday, October 22, when descendants of Perley Maxwell will share their family stories.