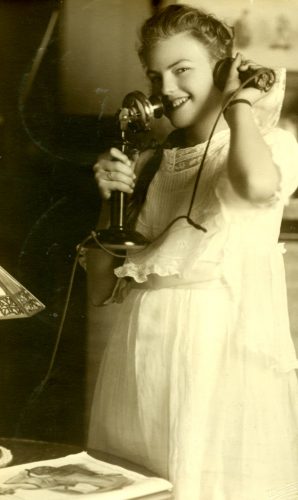 While researching online for this article, I searched for the date when telephone service first came to Mendocino County. All sorts of hits came up, but alas, they addressed the issue of cellular service! Much of Mendocino County is still known for its remoteness, and one website actually stated that residents and visitors alike can tell when they’ve entered the confines of the county by the disappearance of their signal bars (depending on the service provider). As all serious students of history know, the more things change, the more they remain the same.

The first telephones were used on the West Coast in 1877. Telephone service to the “outside world” came to Mendocino as early as (or late as, depending on one’s perspective) 1897, according to Mendocino City: A Daily Journal. The entry for September 28 of that year says, “Calls could, and were, made to San Francisco and elsewhere about the State. There were some difficulties for a short time, as everyone wanted to try the system.”

Three days prior, on September 25, 1897, there was a notice in the Mendocino Beacon that Frank Bell, general manager of the Sunset Telephone Company, was in town during the week. Perhaps he was involved in the advent of long distance service touted by the Beacon. The Sunset Telephone and Telegraph Company incorporated in 1883 and later was acquired by Pacific Telephone and Telegraph Company in 1906. Those of sufficient age remember “Pac Bell,” which is now AT&T.

In June of 1913, the California Railroad Commission authorized the issuing of bonds worth $75,000, and $50,000 of preferred stock, to purchase the Cloverdale Light & Power Co.. That company supplied light and power in Sonoma and Mendocino counties and telephone service in Sonoma, Napa, Lake and Mendocino counties. There were 2,041 telephone subscribers and 2,100 electrical subscribers. Nearly 500 miles of telephone pole line had been strung while 293 miles of electrical pole line served subscribers. People wishing to invest in public utilities consulted Poor’s Manual of Public Utilities; Street, Railway, Gas, Electric produced by A. B. Leach and Co., Investment Securities, University of California. These data come from the 1915 edition.

By about 1920, when this beguiling photograph of Fort Bragg resident Ruth Bolden was taken, the kinks in the wired system had been mostly worked out. And to this day, we still love our ’phones!