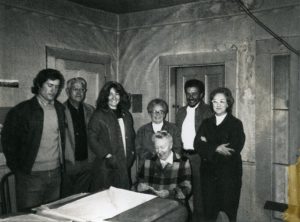 Any organization that has been around for a while acquires a history. The Kelley House Museum has a relationship with the Mendocino Coast, as a non-profit devoted to history itself. While there’s the story of the house — the Kelley family, the town of Mendocino, its life and times, which now span three different centuries — there’s also the history of this organization.

It began with two women, Dorothy Bear and Beth Stebbins. They wanted to enjoy a place and at the same time perpetuate a record of that place by establishing an archive. They began historical research and publishing in 1970. Their love affair with Mendocino culminated in the establishment of “Mendocino Historical Research, Inc.” in July of 1973. One year later, MHRI was recognized as a charity by the IRS.

Back in 1975, the house which had been home to the Kelley family for nearly sixty years was given to this new non-profit, on the condition that it is used for “preservation” purposes, and not for any commercial gain. Folks living in and around the town of Mendocino became involved as volunteers. There was work to be done, not only in building the collections and creating an archive, but in the saving of the circa 1860 house.

During these earliest years of the organization, the rooms of the house were being used as office, meeting and storage spaces while being slowly adapted and restored. Caretakers lived in that portion of the building which had historically served as a kitchen and is now reserved for the research office. The vault was constructed in 1993, and provides space for the largest portions of the collection. During these initial years, the energy and efforts of MHRI were also bent toward the creation of a nationally recognized historic district within the town, so that the physical evidence of our history would not be lost or too heavily compromised. The preservation of much of the town’s historic character, in combination with its coastal location, contributes to its huge appeal.

The visual magic of Mendocino wasn’t brought about by MHRI alone, however. Following the closure of the mill in the late 1930s and up until the advent of the Mendocino Art Center, the town had been in a bit of a time warp. You might call it an economic downturn. Mendocino was dying. In the 1950s, Bill & Jenny Zacha’s vision for an art center resulted in an injection of new life and new blood for the town, but not a tremendous amount of physical change. The establishment of the Mendocino Headlands State Park, which also required a vision and volunteers, surrounded Mendocino with open space.

Now, in 2017, the Kelley House Museum collections include items from the 19th and 20th centuries forward, because history doesn’t end.

This month, volunteers will take up the work of maintaining the house and its gardens. As anyone with a property on the Coast knows all too well, the paint jobs done five, ten, fifteen years ago require maintenance! Along with the work comes the satisfaction of knowing that the house in the heart of Mendocino dedicated to your history is sustained, that Mendocino continues to have this gathering place for the community and for all our history.

Photograph: Dorothy Bear (seated) and Beth Stebbins (behind) with their renovation crew in the kitchen of the Kelley House, with the deed to the property.