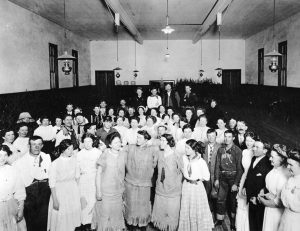 In a nod to the past, the Kelley House Museum is hosting a Hard Times Dance Party at Mendocino’s Crown Hall on Saturday night, October 7, from 8-11:30 p.m. featuring the rock, blues and funky boogie music of The Mighty T-Bones. A full bar will be available. Doors open to the public at 7:30 p.m.. A special reception for members only begins at 6 p.m. with delicious food from the era — like Poor Man’s Caviar and Depression Cake — and a no-host cocktail bar.

Hard Times Dances achieved peak popularity between the Panic of 1893 and the Stock Market Crash of 1929. They gave evidence of an emerging urban middle class with time and money to spare. Inspired by Civil War-era Calico Balls that raised money for soldiers and wartime widows, a Hard Times Dance is part fun and part fundraiser. In lieu of expensive silks and satins, women wore dresses made of cheap cotton calico, the idea being that the money saved could instead be donated to exemplify ideals such as kindness and wartime austerity. As times improved, Hard Times Dances became costume balls with participants dressed in rags or costumes made from flour sacks or as shabby gents or beggars. In 1912, The Circle Concordia Club held a Hard Times Dance in Mendocino. At 10:00 p.m. photographer Nicholas Wilson will snap a shot of the crowd, recreating the photo from the Kelley House archives of a Hard Times Dance in 1912, assuring the event’s place in history.

Come as you are, or in your glad rags. The Hard Times Dance Party is a benefit for the non-profit Kelley House Museum and is sponsored by KOZT The Coast, Harvest Market, North Coast Brewing, Frey Vineyards and Husch Vineyards. Advance tickets are $20 and available at Out of This World in Mendocino, Harvest Market in Fort Bragg, online at BrownPaperTickets.com, or at the Kelley House research office on Albion Street in Mendocino. Tickets will be $25 at the door.