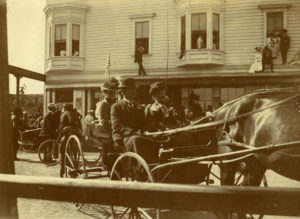 Think of a cat or kitten playing with a ball of yarn as you read this story. It is the perfect metaphor for what happens when a historical question surfaces. It is a story of the Ladies Aid Society, organized by women of the Presbyterian Church in Mendocino. In the Kelley House Museum’s archives are receipts from the Jarvis and Nichols store which provide some hints as to what the Society purchased. Beginning in 1884 and stretching into 1893, the receipts record purchases of chandeliers and fabrics.

What were the women buying? They obtained two chandeliers on March 12, 1884, ($11.10, which included the packing and shipping fees). A third chandelier arrived later that same month. In June of 1886, the Society accumulated items for baking: 1 bottle of vanilla, 1 can of coffee, 1 dozen eggs, 2 bottles of extracts, and 12 pounds of granulated sugar! This particular receipt is of special interest, for in the left margin, next to the entry for the extracts the name “Kelley” was written, in brown ink and by a hand other than the clerk’s. It is spelled with the extra “e” on the receipt. The name “Brayton” appears just below it, beside the entry for all that sugar.

In February of 1887, a new project had been undertaken involving yarns, fabrics and ribbon. We hope to match these dates with whatever records the Presbyterian Church may provide. Both pink and white Zephyr, a type of yarn which is either all wool or wool blended with other fabrics, such as silk, were purchased along with 2 bolts of ribbon, 6 yards of No. 2 ribbon, 7 skeins of Saxony yarn and 4 ½ yards of plaid fabric. Come December of 1887, 10 yards of mohair topped the itemized receipt, along with 6 ½ yards of Cilicia, which is made from goat hair and is associated with tents made in Biblical times. Buttons and dress “stuts,” a yard of linen, silk, thread and braid in unspecified amounts concluded that purchase of $9.30. Perhaps the women were making items to be sold to raise funds?

Four lamps were required in January of 1890, bought at $8 each. One month later, they purchased 24 ounces of Zephyr and three skeins of “G. T.” yarn. After checking into vintage yarns, it was determined that this had to be “Germantown” yarn, which is usually a four-ply yarn and used for sweaters and blankets. By March of 1890, 8 additional ounces of Zephyr were required and, in April, four more. Subsequent purchases in the following years included skeins of worsted cotton batting, more Zephyr, pillow shams, 2 ½ yards of Cretonne (a printed cotton fabric, usually employed for upholstery), 18 ½ yards of “N.G. Twill” (unknown) and thread.

One of the members of the Ladies Aid Society was Mrs. D. L. Brayton. In looking up Brayton, both in our database and on Ancestry.com, it is learned that Mr. D. L. Brayton was a friend of the Ford family of Mendocino, and later of Oakland. Durlin Lee Brayton and his wife, Almeda A. Brayton were counted as residents of Mendocino in the U.S. Census of 1880. Mr. Brayton had served in a company of the Minnesota Infantry during the Civil War and earned his living here as a teamster. With a date of his death and a bit more information, we found that the widow Brayton filed for a pension in February of 1898, about a month after her husband died and was buried in Mendocino’s Evergreen cemetery.

An unexpected turn taken by this particular “ball of yarn” is the discovery that the widow Brayton, born Almeda A. Moulton, married Jerome C. Ford on New Year’s Day of 1900, in Oakland. Here they are on the Fourth of July in their buggy on Main Street, in front of Jarvis and Nichols, where else?

You can research births, deaths, marriages — even store receipts — in the Kelley House Museum archives. Appointments are available weekday afternoons. Please call 707-937-5791 to schedule yours.