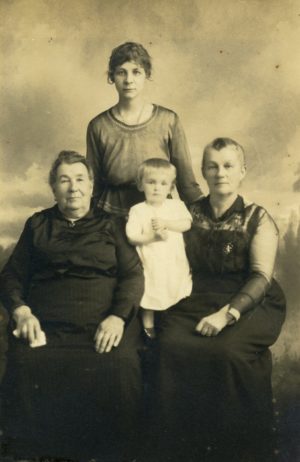 What better way to celebrate Mother’s Day than by looking at this interesting four-generation photograph of women who, among them, brought 21 children into the world and look none the worse for wear. The photo, from the Kelley House Museum archives, was taken in Fort Bragg in 1921, when little Florence Amelia Goldsam was just over one year old. Her mother was 31, her grandmother 51, and her great-grandmother 71.

Her great-grandmother was born Serafina Thomasdottir in northern Finland in 1850. To escape a famine, her family moved when she was a child to Vadsø, Norway, a fishing village at the northern tip of Norway near the border of Finland.

In Vadsø, Serafina married first when she was 19 and had six children with three different husbands: by Peter Anton Pettersen she had two girls named Hilma and Marie (Pettersen went off to the United States in 1872 and was never heard from again); by Johan Johnson she had a boy and a girl named Alfred and Hilda (Johnson died in 1879); and by a fellow named Buckholtz she had two boys named Frank Oscar and Robert (nothing is known about Buckholtz but his name).

Because at least two of her children were already here, Serafina arrived on the Coast with her two youngest sons in 1900 as Fina Buckholtz. A couple years later, she married John Nylund, a bachelor carpenter who lived in Fort Bragg. Johnny was said to have been fond of drink before Fina entered his life, but he gave up the bottle for her.

Fina’s two oldest daughters, Hilma and Marie Pettersen, had come here in 1888, sponsored by their uncle, Peter Mathison. He was married to their father’s sister, Caroline Pettersen, and had settled here in 1883 to farm east of Little River. By 1889, Hilma was married to Thomas Sutherland, a Finn who had changed his name from Sorvari and operated a hotel on Navarro Ridge. He also worked in the Albion mill so it’s likely Hilma took care of the hotel when he was absent. The babies began arriving with great regularity in the two-story ranch house on the ridge. Between 1890 and 1908, Hilma had 12 children–six boys and six girls–eight of whom made it to adulthood. Four of the infants died before their first birthdays and are buried in the Little River cemetery.

According to the National Center for Health Statistics, at the beginning of the 20th century in the United States, rural infant mortality was close to 10%; only in the crowded, pestilential tenements of big cities did it rise to 30%. That Hilma and Tom’s personal percentage hit 33⅓% means that they were unlucky, or conditions were tough up there on Navarro Ridge, or both.

Hilma’s eldest child, Mayme, who no doubt had a hand in raising the little Sutherlands who came after her, married Mathias Goldsam in 1919, when she was 29–about a decade older than her mother and grandmother had been when they wed. Goldsam was a second-generation baker from San Francisco and he and Mayme operated a bakery on Lansing Street in Mendocino for over 20 years. After little Florence Amelia in the photo, Mayme had only two more children–June Estelle and Ralph–thereby scaling back the family fertility rate considerably.

As if to continue that trend, Florence married William House of Fort Bragg, moved to Petaluma, and had absolutely no children at all.

If you want to learn more about these foremothers, or about your mothers, come to the Kelley House Museum and peruse the riches of the archives and online database.