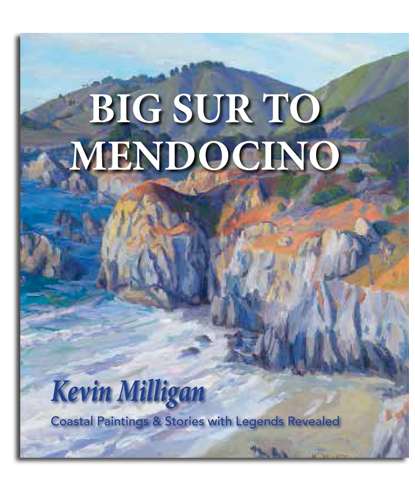 Kevin Milligan was born in St. Louis Missouri. When he was 7 years old his family moved out to the nearby countryside. The new house was made primarily of glass with views looking out on hillside terrain in an oak-hickory forest. In the idyllic setting, his father Guy began to work outdoors on paintings of the area and Kevin was invited along. Thus began a lifelong study of painting the landscape. With his older brother Gary and his twin Kris they began building tree houses and fishing in nearby ponds and exploring the outlying farms, forests and fields. In addition, the brothers had pet raccoons as companions. The trio became Eagle Scouts as they were in constant motion. The family including younger sister Lisa, began playing tennis. All four siblings played varsity for Parkway West High. Mother Jacquelyn was busy managing their numerous activities while Guy was in his studio creating design projects for 7UP and Monsanto and other companies in St. Louis.

Guy would often show the design projects to the family at dinner time before they were presented to the corporations. This was a great artistic influence for Kevin and those designs paid for him to attend the Kansas City Art Institute where he studied with acclaimed figurative teacher Wilbur Niewald. Niewald’s interests were similar to those of the Bay Area Figurative Movement. Ironically, it was the San Francisco Bay Area that Kevin moved to join his twin brother Kris a tennis director. He then began to put these Missouri influences and training to work portraying the San Francisco Bay Area landscape. His career has come full circle as he has shown at several museum exhibitions with the renowned Bay Area Figurative Movement artists. He now directs the Kevin Milligan Gallery on Lincoln Street in Carmel, California.

He is the author of, Mendocino: A Painted Pictorial.