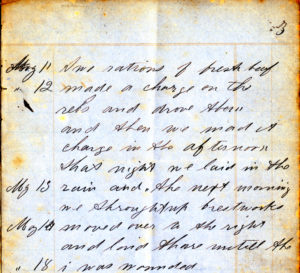 While enjoying a barbecue with friends, it might be of interest to consider that a place as remote from the battlefields of Virginia and Pennsylvania as is the Mendocino Coast has ties to the Civil War. The holiday we observe this Memorial Day has its origins in the sadness and losses resulting from the American Civil War of 1861 to 1865. Initially known as “Decoration Day,” it was widely observed on Saturday, May 30, 1868, to commemorate the sacrifices of Civil War soldiers by tending to their graves. It did not become an officially recognized federal holiday until 1971, when the last Monday in May was designated as Memorial Day.

Those ties derive from the people who settled here; many of whom were veterans of that war. The timing of the advent of the mills and the growth of coastal towns was such that the generations involved were either of an age to be swept up by the Gold Rush, or swept into the struggle which became the Civil War. One of those was John Nelson Dennen, who in 1877 built this home in Little River; but prior to those peaceful times, he took part in historic moments. At the age of about 17, this lad born in Augusta joined Maine’s 31st infantry. The journal he kept during his service is part of the Dennen Collection at the Kelley House Museum.

The journal measures 4 ½” by 7 ¼ ”, and appears to have been designed for keeping accounts. Portions of it were written in pencil and then at some later date written over with brown ink by the same hand.Reading through this handwritten record, some of which is still bound together by the original string, is a thrilling experience for a historian. These pages were at the siege of Petersburg!

Dennen’s service began when he “enlisted for three years” on February 22nd, 1864. On April 16th, he was mustered into service, and two days later he started for Washington . Dennen kept a record of his expenses as he traveled south through Fall River, Massachusetts, to Philadelphia, Washington, then on to Alexandria, arriving at camp on the 23rd of April. On May 5th, the young soldier recorded that he “got within 3 miles of Wilderness.” The next day he wrote succinctly that he “got to Wilderness and had a fight with the rebs and made three charges. lost $10.” His survival was celebrated by an activity with which he became familiar: digging breastworks. The night of May 8th was spent in Chancellorsville, expecting an attack. The soldiers started for Spotsylvania the next day, but stopped within three miles of the town. On the 11th, he “laid behind the brestworks [sic] and that night went back to the rear and got two rations of fresh beef.” John Dennen was wounded on May 18th at Spotsylvania, and arrived at Fredericksburg the following day. He did not record the nature of the wound or how it was received.

The months which followed were filled with trips to hospitals in Philadelphia and New York. A furlough brought him home in August to fish and pick black berries. He returned to service making his way from Bedloe’s Island in New York Harbor (today’s Liberty Island) to City Point, Virginia and then to Petersburg. There he endured the seemingly interminable days of that siege, marked only by battalion drills, picket duty, guard duty, laying in at camp, illness (he only specifically mentioned headaches), and the rare game of baseball. John Dennen spent Thanksgiving that year with the 16th Maine infantry. He wrote that it snowed on December 10th.

Six days into the new year of 1865, Dennen “went over to the Generals and saw 1 man hung for desertion.”  On the day when federal troops finally entered Petersburg, the record becomes nearly illegible due to a smearing of the pencil on the pages and possibly water damage. On April 2, 1865, Dennen described action in which 800 prisoners were taken. The entry for April 4th states “We was on the march.” He spent the days just prior to and immediately after the surrender near Nottoway Court House, which is between Appomattox and Petersburg. There is no discernible mention of the surrender, or of Lincoln’s assassination. His company participated in the Army’s “Grand Review” in Washington on May 22, 1865. On leaving the army, he had earned the rank of Sergeant Major.