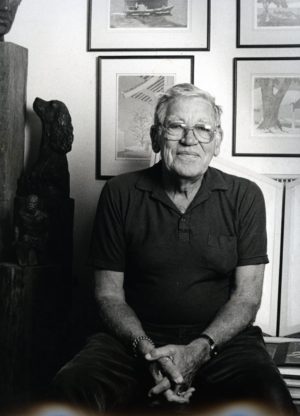 Zacha’s Bay Window Gallery, owned by Lucia Zacha, closes today. This marks the end of a historic era in the life of Mendocino. Walking through the final exhibit, one sees the works of the Mendocino Heritage Artists:  Dorr Bothwell (1902-2000), Sasha Makovkin (1928-2003), Fran Moyer (1922-2006), Hilda Pertha (1911-2011), Charles Marchant Stevenson (1927-2004), Toshida Yoshida (1911-1995) and William Zacha (1920-1998). The history of what Bill and Jennie Zacha meant to this town and how their dedication in bringing artists here resulted in the creation of the Mendocino Art Center, and the town’s subsequent revitalization, has been told in more than one place over the years. A visit to www.williamzacha.com provides more details than can be included here. During the early years, when the changes that the Zachas helped bring about were beginning to be felt, their story was captured in a national magazine.

Bill Zacha and his love affair with Mendocino were the subjects of an article featured in Look magazine in September 1962. The article included photographs taken by Ted Streshinsky and was produced by Chandler Brossard. It caused a big stir, to say the least! Titled “California Village: A Young Man Saves an Old Town,” the article struck a chord with people from all across the nation and beyond. People were concerned about the downsides of urban sprawl such as poor air quality, lack of elbow room and connection to the land. As described, Mendocino seemed like the perfect place to avoid “progress.” The flurry of letters which descended on the Zacha office and household tells its own story.

People wrote from places as far ranging as Unalakleet, Alaska, and Tampa, Florida. They were couples on the verge of retirement and families with young children. They were business persons and teachers and, yes, even a few artists. There was no Mendocino Coast Chamber of Commerce back then, although there had been a Chamber of Commerce in Fort Bragg since 1912. Fort Bragg was not even mentioned in the Look article. People wrote to Bill Zacha asking for information and assistance which could easily have been handled by the Chamber of Commerce. Many letter writers were apologetic about their requests but went on to ask Bill Zacha, a man they had only heard of through the article, to help them make the move to Mendocino.

I realize that I am being somewhat presumptuous in writing

to you personally, but I have a feeling that you won’t really mind.

Have just read the article about Mendocino. It sounds like an interesting

& peaceful place. I am looking for such a town, if there is some employment.

My house is sold & I want to move in 30 days to a milder climate.

This morning while I was sitting under the dryer in the

Many of the letters were simply addressed to “Mr. Bill Zacha, Mendocino, California.” Perhaps most remarkable is that many appear to have been answered, since there are handwritten dates on their upper margins which fell after the postmark date. People wanted to know about housing, employment, climate, shopping and whether the train came into town, or if they could fly up and back in the same day. There are approximately 103 letters in the collection preserved at the Kelley House archives, the majority of which came from complete strangers. Imagine if all of them had moved here! Determining whether any of them did would be a further contribution to the history of Mendocino.

The Kelley House Museum archives are a window to the past. Please call for an appointment to see the Zacha collection, or to glimpse other moments in Mendocino history: 707-937-5791.