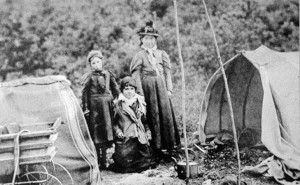 It’s not unusual, however unfair, for people to look askance at outsiders who dress, talk, or act differently, especially if they come in groups. One such group, commonly known as Gypsies, have been maligned, even systematically murdered over the centuries, particularly in Europe.

The term “Gypsy” originally referred only to ethnic Gypsies, as opposed to other “travelers.” Although the term has derogatory implications, it may have originated among Gypsies themselves, believing they were a lost tribe of Egyptians. Ethnic Gypsies are not one people, rather multiple groups of similar cultures but different languages and country origin. The Romani originated in Northern India and by 1100 CE had migrated throughout Europe.

Thousands of ethnic Gypsies came to the U.S., primarily after 1880, to settle in the East and South. Eventually they migrated into numerous states, including California. Many, though not all, were wanderers, a lifestyle unacceptable to the sedentary communities where they stopped, camped, and sometimes created unlawful mischief.

The April 17, 1915 issue of the Mendocino Beacon ran two front-page articles about the new “Gipsy” gentry in town. The first piece, “Unwelcome Visitors” poked a finger at a few locals—“our E. Z. Marks”—who turned their dollars over to “a couple of Gipsy wenches.” Constable Patton gave the entire group the “hurry up signal” to beat their way up the road.

Article two, “Gypsy Man At Caspar Claims Camp Was Attacked At Night,” relates a 1 a.m. raid on a Caspar Gypsy camp by three young Caspar men: Billy Wilson, Carl Johnson, and Alfred Olson. When asked to leave, they refused. One of the camp men, Peter Mitchell, took up a shotgun and seriously wounded Wilson, a 29 year-old worker at the Caspar Mill. Billy would later die from blood loss through severed artery in his leg. His friends either didn’t or couldn’t help stop the bleeding. By the time they brought him to the hospital in Fort Bragg later that day, Wilson’s condition turned from grave to fatal. Billy Wilson, “well-known on this coast,” was buried at Fish Rock, former home of the Wilson family.

The Sheriff held the campers until an inquest into the death could determine whether criminal charges were warranted against Mitchell. A week later, the coroner’s inquest jury verdict accused him of “intent to kill”— murder. District Attorney McCowan would prepare for the preliminary hearing, according to a piece in the April 23 issue of the Ukiah Dispatch Democrat. The same article relayed word from Mendocino that Mitchell and the two families grouped at the campsite were Greek. They were mistaken for the Gypsies that used the site, but had moved on several days before the fateful encounter. More details about the confrontation surfaced. Billy Wilson, according to Peter Mitchell’s testimony, entered the tent where Peter’s wife and month-old baby lay in bed. Wilson grabbed the child away from its mother, flinging it to the ground. He then tried to get into the bed. Mitchell grabbed a shotgun, later saying he only shot at the floor to scare Wilson off. He claimed to be unaware the shot hit anyone.

The original murder charge was soon dropped to manslaughter. The May 8 edition of the Beacon reported the District Attorney’s decision that a conviction “could not be made on such a charge.” Mitchell was released.

Without reading witness statements, the testimony from the preliminary hearing, or entering the jurors’ minds and hearts, we can’t know if Gypsy prejudice colored the verdict. The two remaining boys admitted to drinking that night, but that they never meant anyone harm. Confused testimony on the part of the witnesses, even among family members, may have led to the District Attorney’s decision not to prosecute. There is no follow-up to the Mitchell’s story.

A current resurgence of violence against European Gypsies drove small numbers to flee to Canada, which offered asylum until recently. Groups are again passing through California, now via Mexico with its open acceptance policy. A few groups have tried scam operations in the Bay Area. Perhaps most only camp and move on, looking for a better life.