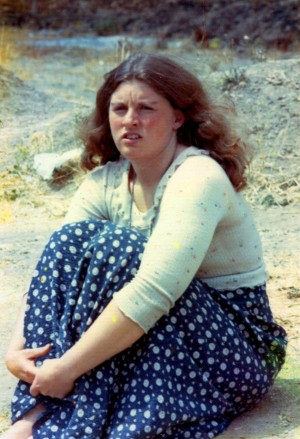 The Kelley House Museum is celebrating Mendocino’s Hippie Days with an exhibit, and they suggested that after writing about so many of the women who influenced Mendocino’s history, I write about my myself. I confess to being thrilled; I like to think I have a place among the women who shaped Mendocino. For anyone who loves this coast, who claims some piece of it for themselves—like I do—these pioneer women stand as our mothers, our roots, the soil in which we plant our feet.

I first moved to Mendocino in 1973. I’ve left numerous times over the years, but always come back. Mendocino is home. What I remember about the 70s survives in fragments. I remember playing chess in the French Café, a wonderfully relaxed restaurant on Main Street. I remember drinking beer in the Cellar, the cozy basement bar of the old Sea Gull. I remember working at the Art Center in the front office, registering students for workshops and organizing foreign films for weekend nights. Most of all I remember the hunk of headlands I call “The Point.”

These days The Point lives behind public restrooms. In the 70s it was a forgotten piece of real estate, rarely attracting visitors. From the road it looked difficult to get at, shielded by a small grove of Cypress. Fact is, once you make it through the trees (even now) you feel like you might be a thousand miles from civilization. And under the Cypress canopy, there’s a clearing that could be deep in some distant forest.

My love affair with The Point evolved out of one of the most remarkable experiences of my life. It’s hard to explain without sounding foolish, but my world was full of purposeful coincidence in those days, rich with meaningful significance. My memory of the incident starts with an astrological reading. The fellow (and it was some fellow) who did the reading told me it was too bad Venus and Jupiter weren’t in conjunction. They sat in Aquarius in my 12th house some fourteen degrees apart. He said it would be beneficent, give me access, protection, favor with the gods. I was not a critical thinking instructor in those days, so I took him at his word, didn’t question the diagnosis. Instead, I wandered with existential dismay to The Point, arriving to a Michelangelo sunset. The sky was all rose and lavender with two huge clouds hanging in the air—one pink, one blue, close, but distinctly separate. I settled on the rocky edge and watched the ocean crash around me. As the sky flaunted its beauty, I decided those clouds represented Venus (pink) and Jupiter (blue).

“Bring them together,” I commanded, “Bring Venus and Jupiter into conjunction.”

I sat for a long time trying to imagine, pray, or wish the clouds together, and the more they didn’t budge, the more distressed I became. I prayed as earnestly as I knew how. I begged and pleaded, probably made promises—all to no avail. The clouds remained stubbornly separate. Eventually I let it go. Pretty brazen, I told myself. And that’s when it happened.

The clouds started to move. At first, I was too startled to believe it. But as little puffs of pink and blue broke from the parent clouds and joined, I became frightened. When it was no longer possible to deny what was happening, the ground beneath me shook. Literally. I leapt up with a scream and ran, my long skirt rustling round my ankles. I’d gone about fifty feet before I realized it was an earthquake. When I turned back, the clouds were one. True story, I swear: the quake was four point something, big enough to make the next day’s newspaper.

Want more hippie stories? Stop by the Kelley House and take in their excellent exhibit. It’s the perfect environment to recall the crazy magic before Mendocino’s bed and breakfast days.