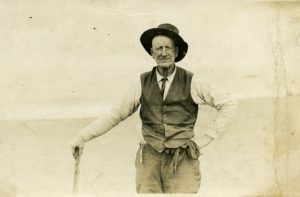 New characters in the panoply of history come to light at the Kelley House on a regular basis, often due to generous donations of time and materials to the archives and museum. A case in point involves items received as part of a large collection of photographs and other keepsakes from Mae Johnson, who died in August 2016. Mae had been raised in Caspar and knew everyone from its early days. Receiving a box of mementoes is only the first step in an involved and time-consuming process. First there is cataloging of the items, which are then entered into the Kelley House database where they are available to researchers.

One result of this process is the photograph Sylvester Deshone Nolan. He was known as “Vess,” adopting a shortened version of his first name. This photograph, printed on a post card, has a note on the back written in pencil by Hazel Nimela, another native of Caspar. It says that Mr. Nolan repaired horseshoes, having a shop where that work was done in Caspar. Would that occupation make him a blacksmith or a ferrier, or possibly both? The photograph certainly gives viewers the sense of a man who worked hard all his life.

Vess was born in Maine, about 1853. He was living in the vicinity of Point Arena at the time of the federal census of 1880, giving his occupation then as teamster. Certainly a teamster would have to be handy at repairing horseshoes. The census record noted that he had been out of work for five long months that year, due to a broken leg. Sometime during the subsequent decade, Vess moved north along the coast and settled in Caspar. Brief items reported locally stated that he had purchased the Caspar Hotel in the winter of 1889 and began conducting business there in the spring of 1890.

A brief item dated 1894 mentioned that “Ves Nolan, the genial landlord of the Caspar Hotel,” had a collection of “blooded fowl,” some of which were known for their ability to fight. About that same time, another notice stated that “S. D. Nolan” had been appointed Deputy Sheriff of Big River Township by Sheriff Johnson. In August of 1895, Vess gave a “social hop” in his hall on a Saturday evening, where the dancing went on into the “wee hours of the morning.” Perhaps that was the evening when Vess began thinking about marriage. He thought long and hard, apparently, as he married for the first time about 1907.

He married Della Lermond, a native of Albion, the daughter of Sanford and Fannie Bacon Lermond. Mr. Nolan was 53 at the time of his wedding; the bride was 25. They had two sons, Harold and Sylvester D. Nolan, Junior. One source of confusion is that there was another prominent Nolan family in Caspar at about the same time. They were Millard and Olga Wahlstrom Nolan who owned the grocery store right next to the Caspar Hotel.

Vess and his family moved to Petaluma about 1925. Harold grew up to join the U.S. Army and was stationed in Honolulu at the beginning of WWII. He later resided in Los Angeles. His brother was a guard at San Quentin before that war.

The information we’ve now assembled concerning this particular North Coast family came from a recently acquired photograph, clippings collected and filed decades ago, and the miracle of the internet in the guise of ancestry.com.

If you’re curious about your family’s story, or wish to share it with us, please come by the Research Office weekday afternoons. If you have a keen eye for detail and enjoy searching for information, we would be happy to have your help as a new volunteer.