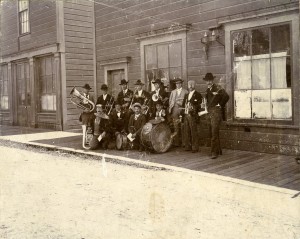 Brass Bands were huge back in the day.  It was a matter of town pride to have at least one, if not more.  At one time, Mendocino could boast of a Brass Band and a Ladies’ Brass Band, as well as an orchestra.  Our photograph was taken on May 29, 1898, presumably in Mendocino.

The men in this photograph were not just band mates.  They knew each other from other contexts too.  The photograph belonged to one of the band members, Joe Ramos.  Hand-written identifications on the photograph were given as follows:  Front row, left to right – Joe Ramos, Mattie (Matteos) Osborne, Joe Golgert, and Bill Hines.  Back row, left to right – Joe Patton, Jim McGuire, George Marshall, Dana Gray, Ernst (Ernest?) Knudsen, Jim Corrigan, A.G. Stone, (?) Erickson.

Joe Ramos would have known Mattie Osborne and Bill Hines from working in the Mendocino Lumber Company’s Big River Mill.  They are all in a crew photograph taken in 1897.  Another cohort within the Band may have grown out of the fact that Joe Golgert, Dana Gray, George Marshall and Joe Patton all played for the Mendocino High School Football team.  George Marshall was in the team photographs from both 1896 and 1898.  Joe Golgert also played baseball with the Mendocino Colts, in 1896, and was photographed with the team, standing at the base of the Kelley House water tower.  Dana Gray graduated from Mendocino High in 1898.

We know a far bit about some of these men, who were the sons of families fortunate enough to have arrived here when opportunities abounded.  Jim C. Corrigan was the son of James Sumner Corrigan, who began a store in Little River, which was later moved to Albion.  Albert G. Stone’s father, Oscar Stone, purchased the Captain Lansing house, was a watch maker, and owned a jewelry store in Mendocino.  The Gray family married into the Stevens family of Little River, and Mark Dana Gray, Jr. must have found time in a busy schedule, to play with the Band.

The Band may have represented one of those rare institutions where musicianship mattered more than whether one was a mill worker or was born to a family with a father who didn’t have to do the heavy work in one of the mills.  An article on the American Brass Band Movement discussing the influences of German, Irish and Italian immigrants put it this way,

In American amateur brass bands the lines dividing social classes were not so sharply drawn as in British ones. Moreover, while Britons were expanding their empire abroad, they were not, as were their Anglo-American relatives, receiving foreigners at home. The immigration of the Germans, Irish, and Italians, among others, had a decisive influence on American popular culture in the 1850s.(source)

I would only add that these influences continued well beyond the 1850s; and that each succeeding group of immigrants has contributed to American life, and continues to do so.  If you have any information regarding the families mentioned, or would like to assist with our upcoming exhibit on immigration and Mendocino, please contact the Kelley House Museum by calling 707-937-5791 or send an email to curator@kelleyhousemuseum.org.