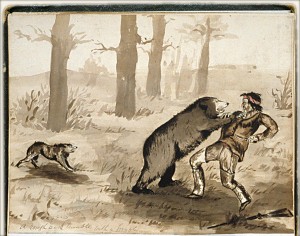 “A rough and tumble with a grizzly,” watercolor by H. Bullock Webster, 1878, from the University of British Columbia collection.

Whether or not Cuffey’s Cove got its name from the grizzlies in the area (Mendocino Beacon, Kelley House Calendar, February 18, 2016), bears were abundant there—at least until the European settlers started shooting them in the early 1850s.  Among the first documented Cuffey’s Cove bear hunters were Francisco Faria (Portugee Frank), Captain Charles Fletcher (of Navarro-by-the Sea), and James Kenny, who arrived in 1855 and ranched before building the first mill there.

Chroniclers of the rapid decimation of the grizzly population in California—from an estimated 10,000-12,000 in 1846 to none by 1924–blame the 1860 introduction of the repeating rifle, but even without that, the local hunters did their share with the single-shot weapons they had, especially after customizing them a bit.

Fletcher came here around 1851 and supported himself at first by hunting and fishing; with Faria, he provided fresh game—elk mostly–to William Richardson’s Albion River mill.  At 6 1/2 feet tall, Fletcher was an unusually big man and, according to his granddaughter, Elsie Schaeffer Farnsworth, “he had a great reputation as a bear hunter, and his rifle was equally renowned.”  That rifle—the “Old Betsy” of Mendocino County—shows up in the Kelley House archives numerous times.

James Skiffington of Melburne (near Comptche), who knew Faria before he died, described in the Mendocino Beacon of May 15, 1948, how Faria became “bravo for bear” after dispatching a giant bruin that had been trying to take an elk hindquarter from his storehouse.  First, Faria borrowed Captain Fletcher’s rifle, “the largest gun in the area.”  Another man with a muzzle-loaded pistol that shot a large slug gave him 16 of them.  He put a big charge of powder in the rifle, and the slugs, and waited until nightfall.  When he heard the bear, he “turned loose the old gun at a big object he could hardly see between him and the stars. There was a terrible roar, and Faria ran into the house. When daylight came, they found he had blown a hole right through the bear’s heart.”

After Faria grew fond of shooting bears, he ranged widely over the area in search of quarry, often using dogs.  But at Mal Paso (near Irish Beach) he was badly mauled by a wounded grizzly he pursued into the bush with only a hunting knife, and was then shot in the leg by a compadre attempting to kill the bear.  With a permanently deformed left arm and a bad limp, Faria turned to talking about his bear hunting days.

Kate Kenny Gorman, James Kenny’s daughter, recalled in her reminiscences that “great were the bear hunts” undertaken by her father and Charles Fletcher (Mendocino Historical Review, Spring 1974).  “I can see as if it were yesterday the bears on top of the hills above the trail [behind our cabin].  They would not venture down during the daytime but await the night, and then come into the fields and kill and carry off the hogs.  Losing patience with the marauders, my father had Captain Fletcher of Navarro come down the coast with his gun to help him.  After nightfall they would await the squealing of pigs and then sally forth with their guns to get the bears.”

An August 30, 1902 Beacon article on Fletcher’s death observed that, “As his neighbors on the coast became more numerous, he was greatly troubled by people who wanted to borrow his rifle, guns being scarce.  He sent East for a special piece of steel, had it bored, and fitted it himself.  The gun was nearly six feet long and weighed 30 pounds.  When borrowers called on him for the gun, he would point to it and tell them to take it.  As the average man could hardly raise it to shooting position, Fletcher was not often short of his weapon after that.”

Unfortunately, we know little more about the fabled gun, but if you do, please contact the museum at (707) 937-5791, or send an email to curator@kelleyhousemuseum.org.