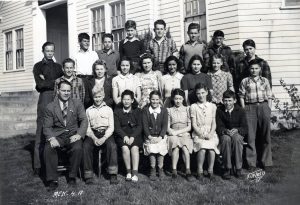 A few weeks ago (Thursday, March 31st), the Beacon published another Kelley House Calendar ‘History Mystery’ which had the result of bringing together some of the area’s long-term citizens.

The first to contact us after publication was Jeanette Hansen.  She had a plan to gather with her cousin, Alvin Mendosa, and friends, Henry and Florence Dahl, at the Senior Center.  They pulled out our photograph and identified several of those pictured here.  Jeanette called the Kelley House, and made her report.  Next, we heard from Bob Canclini, who caught up with the Kelley House curator at the Whitesboro Grange Spaghetti Dinner.  Bob recognized several of the students from the photograph, and initially thought that he might be in it himself.  Mr. Canclini contacted someone who he was sure was in the photograph, Norman Mallory, who lives in Fort Bragg.  Last to contact us was someone who was supposed to be in the photograph, but couldn’t show up that day, due to demands for work at home: Mr. Tim Kaarto, now residing in Berkeley.  Tim gave his best to his friend, Bob Canclini.

Here are the identifications as they currently stand.  There is only one face on which there was not 100% agreement, and that is the girl who is in the second or middle row, second from the left.  [Bob Canclini pulled out his Mendocino High School annual, ‘The Boom’ for the class of 1946, and consulted it as a back-up for the identification which he and Norm Mallory favor.]

Thank you to all who contributed to making these identifications, and please let us know if we have made any errors in spelling or placement of faces to names.  The Kelley House Museum is grateful to you for your time and memories!