A Whole Lot of Shaking

A Whole Lot of Shaking 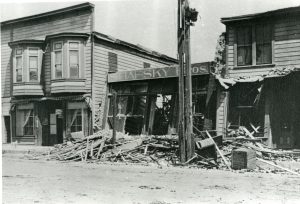 Because we mark the 110th anniversary of the San Francisco earthquake this week, I decided to spend a little time sifting through our seismic past.  Though named after one city, the April 18, 1906 quake roared along a 290-mile rupture of the San Andreas fault from San Juan Bautista to Shelter Cove.  Accounts in the Kelley House archives reveal that, from Manchester to Usal, landslides shook loose from hillsides, sand boils erupted along river banks, “redwoods swayed to and fro for fully 10 minutes after the shock,” fissures opened under roads, bridges were destroyed, railroad tracks buckled, and cows toppled in the fields.  Near Point Arena, fault movement displaced a fence and row of trees by over 16 feet.

In the towns and villages the damages were extensive.  The accompanying photo of the collapsed Shafsky Brothers department/grocery store in Fort Bragg is one of the most enduring, and representative, images we have of the havoc wreaked by the tremor.  The second-story walls of the brick structure—which stood on Main Street where Racine’s is now–fell onto the Marks building (on the right), killing the proprietor of the restaurant there, according to the Advocate of May 2, 1906.

That was the only death in the town, amazingly enough, since four other unreinforced masonry buildings came down, crushing the wooden structures next to them.  The two that survived—Gus West’s saloon (now the Golden West) and the Bank of Fort Bragg (directly north of the Company Store)—did so because they had “robust wood inner structures,” according to the Advocate.  Most wooden buildings withstood the shaking well, but nearly all were moved off their foundations.

One block east of Shafsky’s, a fire was started by a residential coal oil stove, and it soon spread to businesses nearby.  At the Union Lumber Company mill, the steel smokestack fell over and a fire started in the furnaces.  Since the town’s water mains had been ruptured, there was no way to fight the flames until a locomotive and fire pump were positioned near the mill pond to draw water from it.

After the mill fires were doused, the captain of a steamer docked at the mill wharf had his sailors gather up all the hose they could find in order to pump water from the mill pond to downtown.  Nearly two blocks were burned to the ground, but without the captain’s effort, the entirety of the commercial area could have gone up in smoke.

In Mendocino, the brick smokestack at the mill on Big River collapsed, but there were no other masonry structures in town except chimneys, “few of which escaped destruction,” as reported by the Beacon of May 5, 1906.  Most wooden buildings shifted off their foundations—the Occidental Hotel was “moved 5 feet to the south”–but only one water tower collapsed, likely because most were also “robust wooden structures” with plenty of lateral bracing.

In Point Arena, “pretty much every brick building in town was destroyed,” noted the Ukiah Dispatch Democrat of April 27, 1906, wooden buildings were thrown off their foundations, and a fire started in the chemical room of the school.  The 156-foot tall lighthouse tower cracked and ruptured, and the lenses in the lantern were shaken loose and broken.  The entire complex was subsequently demolished and rebuilt farther inland.

In reporting on damages a few weeks after the earthquake, the Advocate noted that the Shafsky Brothers had lost all the inventory in their store—valued at $25,000—but since it had been insured, they moved to the nearby Milliken building a week after the quake, and were “carrying on with their business as if nothing had happened.”  To learn more about what did happen, and to reflect on what could happen again, visit the Kelley House Museum archives from 1:00-4:00 pm Monday through Friday.