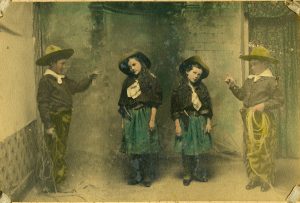 In 1907 and again in 1910, four children trod the boards of ‘Halliday’s Hall’ in Point Arena, during evening ‘Entertainments.’  When comparing the two photographs, it is apparent that the scenery behind the children, in the small space provided for their acting, is the same.  Harder to confirm may be the fact that some of the children in each photograph are the same, as three years separate the taking of the two photos.

The earlier of the two, taken in 1907, depicts the children in costumes of cowboys and cowgirls.  All four children are wearing broad brimmed hats, the boys with kerchiefs worn outside their collars, the girls with broader collars and scarves worn as ties.  The boys each have ropes or lariats, pistol holsters, and are seemingly admonishing the girls with their index fingers!  The girls of this 1907 photograph face the camera, though their heads are at an angle such that they are partially facing the boys.

Was the cowpuncher theme related to the success and popularity of ‘Buffalo Bill’s Wild West,’ which had opened in Nebraska in 1883?  The ‘Wild West’ toured Europe multiple times, the last time in 1906. 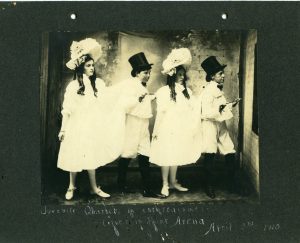 By 1910, there are again four children, on the same stage, only this time wearing costumes which suggest a vaudeville show, everyone has a hat (the girls’ are filled with bows, flounces and other decorative elements, reflecting the fashion of the time; while the boys are in shiny top hats).  The children, dressed in white, except for the boys’ ties, stockings and boots, are all facing one side of the stage, perhaps posed for the camera but not actually performing.

While it’s not certain, it does appear that two of the children, the girl on the left in both photographs, and the boy between the girls in the 1910 photograph, are the same.  It is noteworthy that both of these photographs came to the archives of the Kelley House from the Dennen family, who resided in Point Arena.

Finally, J.C. Halliday was a notary in Point Arena in the early 1900s.  He had a daughter born to him in 1892, and another in 1899. There was a son, also born in 1909 to a J.H. Halliday.  All entered the world in Point Arena.  People favored their anonymity in those days; so many people used their initials only. Mothers’ and children’s names are currently unknown.

If you are a long-term resident of Point Arena, or a fan or its history, and you have further information about ‘Halliday’s Hall,’ the Halliday family, or any of these children, please contact the Kelley House Museum, by sending an email to curator@kelleyhousemuseum.org or calling 707-937-5791.