On this day in Mendocino history…

January 24, 1890 – The Mendocino Lumber Company mill began operating again after a two-month closure. The mill had been in violation of a new state law prohibiting the dumping of sawdust into rivers, as the pollution was killing fish.

Sawmills had historically disposed of their waste by dumping it into the nearest stream. According to “Big River was Dammed” by Francis Jackson, “a wing dam was built in 1884 in order to throw the river current to the mill bank so that the sawdust and refuse from lumber sawing operations that was piling up in the river could be washed out to sea.” 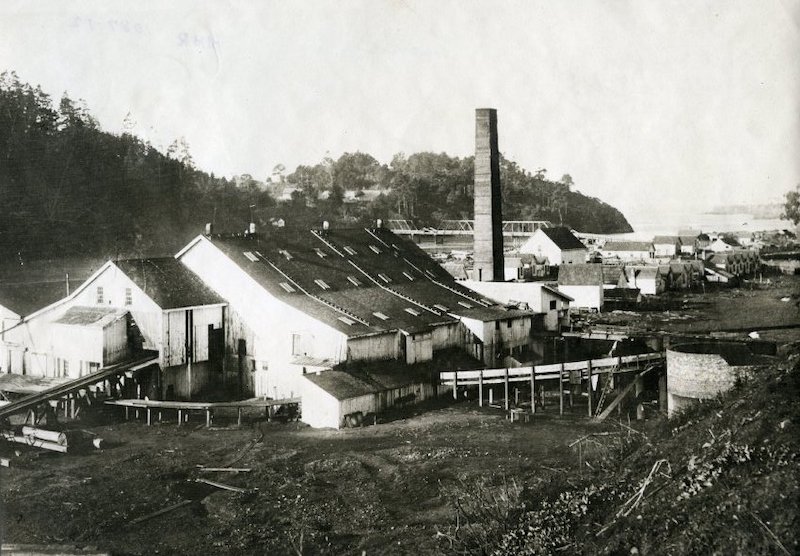 Mendocino Lumber Mill, c. 1900. The third Mendocino Lumber Company Mill, and the second mill to be built on Big River Flat. The square brick chimney was constructed in 1864 with over one million locally made bricks. This chimney collapsed in the 1906 earthquake. The row of small cabins in the upper right housed the unmarried workers. The bridge across the river in the background was built in 1898. In the foreground on the right side of the photo is the sawdust burner, which was made of brick and was as tall as a two story building. (Gift of Emery Escola)

On August 31, 1889, the Mendocino Beacon reported that a new law “which makes it a misdemeanor to deposit sawdust, lime, gas, tar or other deleterious substances in any of the public waters of this State, will go into effect September 1st. All Deputy Fish Commissioners in the State have been notified to strictly enforce the law.”

In November, the Beacon warned, “C. C. Johnson has been appointed Deputy Fish Commissioner for this district and has taken some action to prevent the violation of the fish law.” A week later, Johnson shut down the Mendocino mill, and the Beacon reported that the mill would not start up again until a method of burning the sawdust was procured.

Between November and January, a new sawdust disposal system was installed, including a conveyor to move the sawdust to a burning area away from the mill and the river.