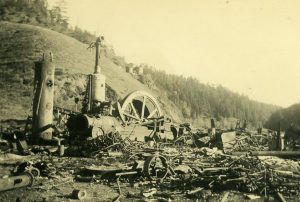 Seeing Mendocino as it is today, it may be difficult to think of the town as a mill town, but it certainly was. The mill was central to the existence of the town, and to the presence of the other towns which came into being as a result of the lumber industry. The mill’s beginning is well-documented, with the players named and the chronology established. The end of the mill, however, seems to be a somewhat different story. There is a photograph in the collection of the Kelley House Museum that may provide some answers.

As is often the case when something such as a mill winds down, the end arrived gradually. A 1934 article from the Mendocino Beacon stated that the mill had been closed for almost three years. The mill would be working by the middle of October of that year, the story went on to say, and the “welcome sound” of the mill’s whistle would be heard again. The writer stated that upon reopening that fall, about seventy men would be hired to operate both the mill and the yard.

As explained by local writer Don Burleson in his November 1976 article “Mendocino Lumber Company: Railroading on Big River,” for the rail fan magazine Western Railroader, the Great Depression was the principal reason behind the closing of the mill at Mendocino. The Union Lumber Company acquired the Mendocino Lumber Company in 1906. Burleson noted that production came to a halt in 1937, although just prior to dismantling in the “. . . early forties, it reopened to cut fir from a huge log raft from Oregon that broke up just outside Mendocino Bay.”

Six days into the New Year of 1945, the Beacon reported that the mill of the Mendocino Lumber Company had been sold to the Harrah brothers of Willits. The new owners’ plan, according to the article, was to dismantle the mill and “take out the machinery.” A hopeful note was added:  “Though the mill is being dismantled, the timber assets of Big River still remain. . . . Early day loggers passed up much fir and small redwood.”

This historic photograph, taken in 1946, includes the information that to hasten the process of dismantling, the mill and its remains were burned. The machinery was to be scrapped. This was just a year after the end of WWII and, though less desirable perhaps than during the war years, scrap iron would have been of some value. It is a shame that more of the mill — which provided a livelihood for so many and precipitated the birth of the town of Mendocino — wasn’t saved. The question remains as to what else was burned when the combustible portions of the mill were set ablaze?