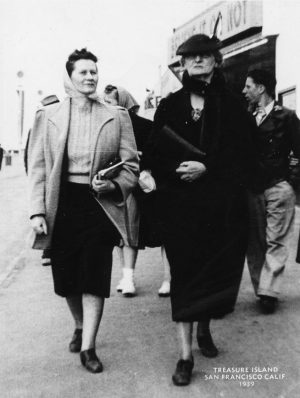 I wish I could have gone to the 1939 Golden Gate International Exposition. At a recent book sale I picked up the official guide book, priced 25 cents, and was fascinated by the attractions offered, even if they happened 78 years ago.

Called a World’s Fair, it lasted from February 18 to December 2, 1939, and featured nations on parade with art and industry added to make a pageant of the Pacific for 20 million visitors to San Francisco. Construction and operations work gave jobs to thousands during the Great Depression. Treasure Island, which was built for the World’s Fair, had its own telephone exchange and information was “Fairgrounds 1939”.

Twenty-one states and the territories of Alaska and Hawaii had buildings and exhibits. Mendocino County had a presence in the Redwood Empire Building, made, of course, of redwood. The amusement zone featured “novel riding devices” with rare and thrilling shows, concessions and exotic Pacific food. You could eat Javanese food, or Russian, which must have been exotic for the time. American food featured a Bean Pot, doughnuts, corn on the cob, Ghirardelli chocolate, and frozen custard. A thousand pound fruitcake was displayed. In the California Building there was a “mother’s room” to change diapers. Even better, a children’s village would babysit your child.

While the guide had everything you would expect on how to get there, charges, what to see, public services and such, I enjoyed reading advertisements offering $2.50 room rates. Hertz was renting cars (dial Underwood 6868) and dining and dancing happened on a street called the Gayway. Spenger’s Grotto and Alioto’s Restaurant still serve dinner along the San Francisco Bay today. Ferry fare to Treasure Island was 5 cents and parking was 50 cents, as was adult admission to the fair.

“What Interests You?” the guidebook asked. From A — agriculture, animals, Army and Navy, Arts, Athletics and Aviation — to W — wine, western states and wildlife — an alphabet of activities was offered. Under M was motors, with auto dealers and air transportation, and music, including where to find bagpipes, Chinese music, marimba bands or a Cossack choir.

The previous owner of my guidebook went to see art. He or she had underlined sculptors and murals to visit in the Court of the Moon and other locations. In the alphabetical index of exhibitors and buildings, I found unexpected offerings. The American Bible Society was there, along with the Birth Control Federation of America. Blindcraft had an exhibit, along with the California Fig Institute. The California Silkworm Industry was there, along with Historical Automobiles. What was a Mystoplane and what was Okonite? The Wine Industry of California exhibited products from three wineries and that was it for wine!

I would have enjoyed the mines and minerals exhibit full of geologic wonders. The International Hall had 250,000 miniature hand-carved items, including 30 tiny elephants on a seed. In the Home and Garden Building, the Independent Order of Foresters displayed a diorama of their tuberculosis sanitarium and the Schlage Lock Company had panic proof locks.

The Livestock Pavilion told the story of the West’s livestock industry and had 600 box stalls and space for 2000 head of cattle. Thirteen major livestock shows took place during the exposition — including cat and dog shows. French Indochina and Netherlands, East Indies had exhibits from their vanishing territories. “Hormone Woman” was an informative display of sex hormones by the Schering Corporation.

Well, I was 78 years too late to see the Golden Gate International Exposition, but I would have loved to have been there.

Photograph: Elizabeth Bishop and Vernie Brown at the 1939 World’s Fair, acting as chaperones for the Mendocino High School Senior Class.