The Joy of Pickling

Home » Making History Blog » The Joy of Pickling
Previous Next

The Joy of Pickling 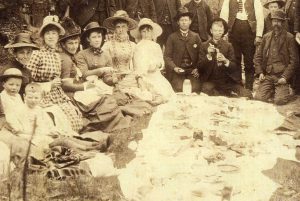 The Kelley House recently received a bound booklet containing a handwritten collection of recipes given to Elise A. Drexler by San Francisco friends in 1898. Elise was born into the William and Eliza Kelley family in 1866, Daisy’s younger sister. It is hard to imagine her with so much as a pin curl out of place or a bead of sweat on her brow, but she must have had a talent in the kitchen and a desire to share with friends.

Among the recipes are selections that bring to mind summer and the chores related to canning and pickling. Food preservation and storage occupied much of women’s time in those years, when trips to the store were not an every day occurrence.

These recipes are as Elise wrote them in her book. This one was given to her by “E.F.P.” for “Sweet Green Tomatoe Pickles.”

Sprinkle through them 1 teacup salt, and let stand over night; drain off in morning; then into this slice ½ doz. green peppers.  Take 1 qt vinegar and 2 of water – pour over all and boil 5 minutes; drain through a colander. – and then take 2 qts vinegar and two (2) lbs. brown sugar, ¼ lb ground mustard, 2 tablespoons cloves, 1 of cinnamon & 2 of allspice.  Boil altogether 15 minutes – Bottle hot.

If you happened to have a fig tree that had done particularly well, you might have wished to try Mrs. Dodge’s recipe for “Pickled Figs.”

Put a layer of figs in the pan then some sugar, then some cinnamon, broken up – then another layer of figs – sugar, cinnamon – when all is in the pan; pour over it, to every 7 lbs. figs – 1 pint of strong vinegar. Put them on the range, let simmer slowly for an hour – and it is well to cover them part of the time & let them steam through; they will cook quiker & not dry down much. Put them hot into the jars.

The jars, which represent an entire industry unto them selves in terms of glassware manufacturing and patents for various types of closures, required sterilization before use. This was an important step because without it, all one’s hard work would likely go to waste. If you have ever raised a crop and then preserved it, you know what it means to start from seed, worry over the plants, water, weed and watch for pests; harvest and then prepare and preserve. The jars and cooking represent the final steps after months of labor and preparation. Canning, or putting up, tomatoes, onions, peppers, peaches, whatever, meant hours of work over a hot stove and handling heavy pans, hauling water, funneling food into the jars — in other words, hot, hard work on a summer’s day. The results were usually worth the time and labor.