Hot News From 130 Years Ago

Hot News From 130 Years Ago 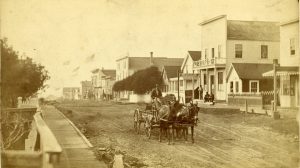 There’s nothing I like better than to read old Mendocino Beacons in the archives of the Kelley House. Only problem is that they’re bound in hardback by year and these big books are difficult to handle and fragile with age. The solution?

Nannie Escola, an early Mendocino historian, regularly clipped the “25, 50, 75, 100 Years Ago…” columns from the Beacon and wrote an index to the subjects covered. All I had to do was pick up the 1886 three ring binder to see what was in the news 130 years ago. Now some of this news was downright boring but some of it gives us an interesting peek into what constituted news then. Shipping activities were always important as all commerce went by boats and no highway system existed in this rural area then. Here’s some of the shipping news.

Ports on the north coast reporting ships loading and unloading included Mendocino, Caspar, Navarro, Little River, Albion, Whitesboro, and Westport.  It was noted the steam schooner “West Coast” arrived with a 48 ton locomotive and six tons of rail for logging railroads in Fort Bragg. The schooner “Fanny Hyde” and captain Jasperson collided with a whale off of Fish Rock on the south coast but didn’t sink. Forty thousand railroad ties had been shipped from Westport this season. The schooner “A.C.Ford” was struck by a meteorite that briefly set it afire.

Abalone shell exports were noted with thousands of pounds of shell going to China, France, England, and Germany. What for? Buttons! Also dried abalones went to China as food. These exports went to San Francisco and on around the world and were worth $95,000 that year.

What was going on around town? An Italian fisherman named Joe caught four sharks in Mendocino Bay. The biggest one was five feet long and weighed 100 pounds. A “square meal” at the Lisbon House was 25 cents, as was a bed overnight. Eugene Brown was selling flour at $5 a barrel and William Heeser offered first class bricks at $12 a thousand. Playing croquet by firelight was a popular craze in Little River.

Dress goods started at five cents a yard at Silas Coombs store in Little River. Professor Baldwin, a tightrope walker, gave two exhibitions on a wire stretched from the Jarvis-Nichols building to Stone’s Jewelry Store. The evening walk was done by torchlight. Horace Milliken brought in a 25-ounce apple that fell from a tree, showing it to the editor.

There was a “huge fuss” over the employment of Chinese to build the railroad from Fort Bragg to Willits. Men at the Fort Bragg Redwood Company threatened to quit (and 115 eventually did) if the Chinese were not discharged. (Historical note: no one wanted the job of excavating tunnels which was one of the few types of employment available then to the Chinese. And those Chinese men had experience building the Central Pacific portion of the transcontinental railroad. There were about 1,000 Chinese in Mendocino County then.)

Logging was the main industry all along the coast in 1886. The Union Lumber Company planted about 40,000 eucalyptus trees on the north and south side of Noyo Harbor. A.B. Tichenor and Company sold 200,000 railroad ties at Navarro. These went to Hawai’i, Japan, South America, Australia and Mexico. Seventy-five thousand board feet of lumber was loaded on the ship “Electra” in six hours.

A final new story noted that “The disgraceful drunken carousals which take place at that new saloon erected on Main Street in the western portion of the town should cause some action to be taken towards suspension of the nuisance. Indecency in that quarter has reached such a degree as to almost prohibit ladies from walking on the street.”