October 28, 1928 – Janet Nystrom died of pneumonia in San Francisco at the age of 15. She was the daughter of Carl and Elizabeth Nystrom. When Janet was born, Carl worked as a machinist at the Mendocino Mill, but he developed lung trouble and moved to a sanitarium in Southern California for his health in 1922. Janet and her mother Elizabeth moved to San Francisco, where Elizabeth took a position as a hotelkeeper. 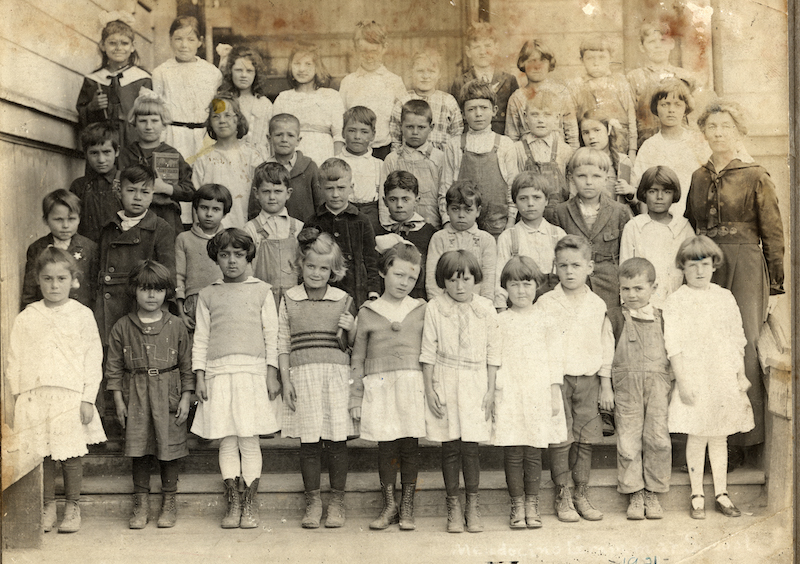 The Mendocino Beacon reported, “Janet was born at Mendocino, May 11th, 1913 and spent her early childhood days in this place, but of recent years has lived in San Francisco with the exception of a few months each summer which she spent on the Mendocino coast visiting relatives and friends.” Just two summers earlier, Janet had danced “a fine exhibition of the Charleston” while attending a gathering of San Francisco visitors at the McShane home in Little River.

Janet passed away on a Sunday morning at 2am. “She was only sick a few hours with pneumonia so her death came as a great shock to all who loved her. Her sweet smile and kindly ways won for her a host of friends here and in San Francisco.”

Sunday, October 30, 11AM-12:30PM – Take a hauntingly beautiful walk through Evergreen cemetery, while your “spirit guide” (Kelley House curator, Marguerite O’Brien) brings to life some of the colorful residents of this 19th Century logging town with her storytelling. Meet the town’s pre-eminent builder, who also happened to be the undertaker. Chuckle at the story of Cinderella, who lived nearby and played a very mischievous prank to discourage inebriated men from taking shortcuts through the cemetery. Admire the artistry of the headstones and learn how to translate the symbols depicted on them. The tour meets at the Kelley House Museum, where the current exhibit “Good Mourning, Mendocino” reveals different cultures’ funeral rites and customs. $20 per person. Pay in person by cash or credit card at time of tour, or book in advance online.